NYCFC Leads the League in Draws

Jun 2, 2019 another draw, Featured, Keira Smith, most draws in the league 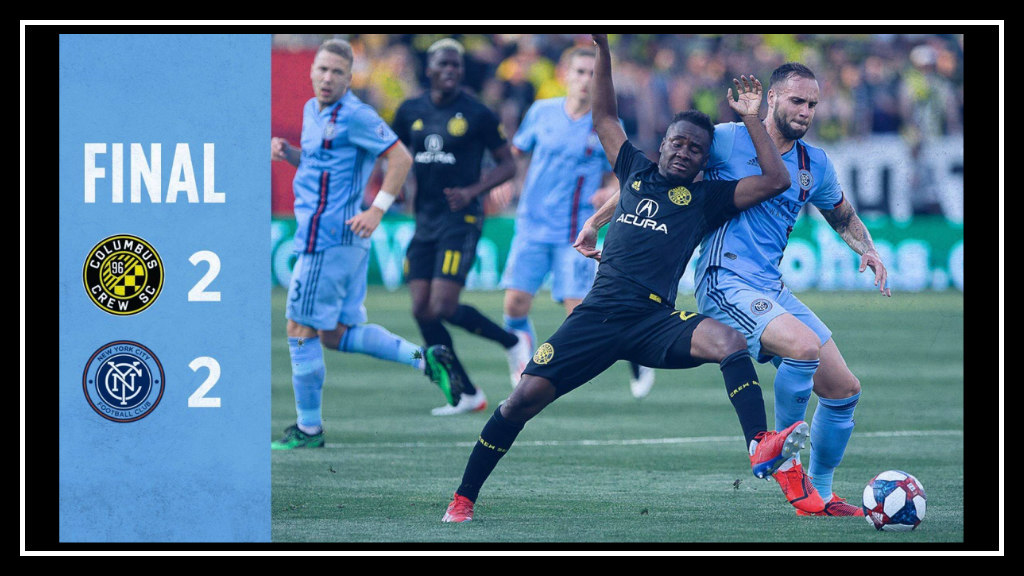 New York City Football Club concluded its long road trip with another draw versus Columbus Crew SC on Saturday.  This result comes a week after another midwestern road tie versus the Chicago Fire.  This particular match was a celebration and farewell party to Crew keeper Zack Steffen, who is heading off to Manchester City, (but not before New York City put two goals past him.)

The match started a bit flat for NYCFC with most early momentum carried by the Crew’s Gyasi Zardes.  A foul in the box called on City’s Alex Callens resulted in a successful Zardes  penalty kick, putting the Crew up 1-0 in the 28th minute.  Héber made it level for New York at 57′ when he scooped up an errant touch by Maxi Moralez off a centering pass by Ismael Tajouri-Shradi.  Héber has been doing a bang up job of anticipating the rebound and putting himself in a position to capitalize on these balls.

Columbus jumped ahead again a few minutes later when David Accam found a wide open Pedro Santos who buried the ball past Sean Johnson.  There seemed to be some failure amongst defenders Callens, James Sands and Maxime Chanot in marking Santos, leaving Johnson a bit defenseless.

Moment of the match for New York City happened in the 75th minute when Alex Ring’s steady defensive pressure allowed him to collect the ball and find a wide open Taty Castellanos who scored a stunner from about 30 yards out. If the team can continue to scoop up scrappy goals in the box and score from way outside the box, the season is looking up. Despite the lack of a win, walking away from that game with a point doesn’t feel bad.

If it seems like it’s been a while since NYCFC played at home, well that’s because the last home appearance was on April 27th.  This past four-game away streak brought the team 8 points via 2 wins and 2 draws.  City now has the title of the team with the most draws in the league with 8.  Nope, there is no crown for this “honor” but next in line to the throne would be both Sporting Kansas City and Vancouver Whitecaps which have drawn 6 times thus far this season.

Another statistic to keep in mind is that the Eastern conference standings are relatively meaningless when there are huge discrepancies in number of games played.  NYCFC (currently sitting in 6th place) has only played 13 matches, while Montreal Impact (ahead in the standings by one position) have played 17.  Obviously, City can potentially gain more points and move ahead in the standings, however the matches in early July could be challenging in the form of Seattle Sounders, Portland Timbers and our friends from across the river, the Red Bulls.