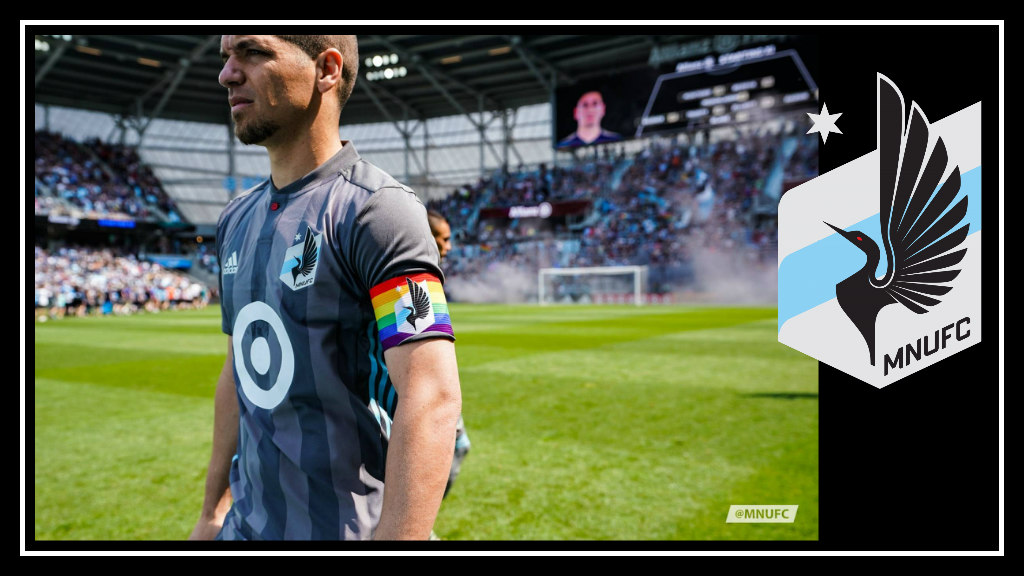 After the exhilarating home win last weekend, the Loons traveled to Atlanta to face their expansion rivals in a midweek match, then turned tail to host Philadelphia Union at home. Through the two matches, Minnesota’s defensive streak came to a screeching halt. Would their attack rise to counterbalance?

It nearly happened in Atlanta, but the best chance came from a much contested play, when Brad Guzan’s goal line save appeared to be a goal from one angle.

There was just enough reasonable doubt that many Loons fans expected a VAR call and were frustrated when it didn’t come. Had it happened, the call would not have changed, but not using VAR on a possible equalizing play is a bit confusing, but that’s another story. Josef Martinez got his mojo back and Atlanta went on to win 3-0. The Loons turned around to prepare for a Doop duel.

As opposed to a number of previous matches when, even after a win, Heath would criticize a handful of players for poor performances, he sang their praises on Sunday afternoon, refusing to address any mistakes or poor quality.

Even in the face of a league-high shots tally (29!), Heath refused to discuss the elephant in the room – his strikers’ failure to finish when putting up all those shots: “A little higher percentage of [goals to shots] we would’ve been, probably, clear. But I’m not going to let that mask what was an outstanding performance on top of the shift that the guys did on Wednesday in Atlanta.”

Instead, he put Sunday’s loss down to fantastic “last-ditch defending” by Philadelphia and their “very, very good – shall we say, professional” ability to go to ground cheaply and stay there. The latter was certainly a factor, earning deafening boos from the Wonderwall, but the former was made easy by some poor finishing from Minnesota’s attackers.

Rookie defender Hassani Dotson, who scored the first equalizer on his first ever MLS career shot, was asked by media if he would do anything to commemorate his first goal: “It was a nice moment, but it doesn’t feel good because we lost.” He did add, however, “Everyone put in a good shift and we were unlucky to not get three points.”

The players, especially defenders, were disappointed. Brent Kallman, involved in Philadelphia’s third goals, said: “I was looking around, I was kind of – we didn’t have many numbers at the back post, we had no guys there. So I stayed on the spot. The ball came in and I kind of got frozen[…] If I keep my feet moving, then I can attack and and it’s not a problem […] It’s obviously one I’d like to have back.”

That self-criticism and drive is one reason Minnesota fans like that hometown boy. Another is his honesty about his teammates. Kallman had words for Dotson on a few occasions, when he didn’t feel enough support from the left back, but he also had some feelings about the Loons’ attack when questioned on their shot total:

“We got to be better going to goal. I mean, when you have enough quality, you know where the defenders are, you know where they’re going to put their legs. You miss that on purpose, so we [defenders] push for it. Those point guys were flying around, but we just have to finish our chances.”

Hassani’s goal was a byproduct of the attackers quitting on the play. The body language before Dotson strikes is telling:

While their coach looked at the big picture, for once, the players are stuck thinking of moments. Wishing they had reacted a little differently here or could have done more to make a play matter there. So many numbers that should have added up to something – a gutsy draw, a gritty win – fluttered away and left Minnesota with zero points earned on a two-match week.

Improvements to be made

Defense: Clean and tough. Minnesota has become a defensive team rather than a ‘let’s score one more than we concede’ team. Communication among the back three/four has dramatically improved thanks to veteran additions and their 90 minute stamina is bolstered by the youthful legs and workhorses, but conceding free kicks in dangerous areas and giving up unnecessary penalty kicks have proven costly.

Midfield: Passing and possession. These are the Loons’ Achilles heel. Philadelphia turned into a turnover battle more than once and there was no strength there in Atlanta on Wednesday. Minnesota needs to find a way to connect their improving defense with the floundering attack to see any overall improvement.

Attack: Finishing. Even when the Loons do finally get the ball into the final third where the strikers can take a shot, those same strikers who saved many a match over the last couple seasons are having trouble finishing the job now. Rodriguez is often slow on the final touch; Abu Danladi isn’t strong enough to muscle past defenders and maintain the ball; and Quintero seems to have lost his confidence, missing simple shots and quitting on the play.

Playing roles in both losses were: Officials, solid opposing defense and Minnesota defensive mishaps. What’s the best way to counter those factors?

An attack capable of scoring goals with – shall we say – consistency? Perhaps with the same consistency with which MNUFC recognizes and celebrates Pride – but that’s, again, another story.