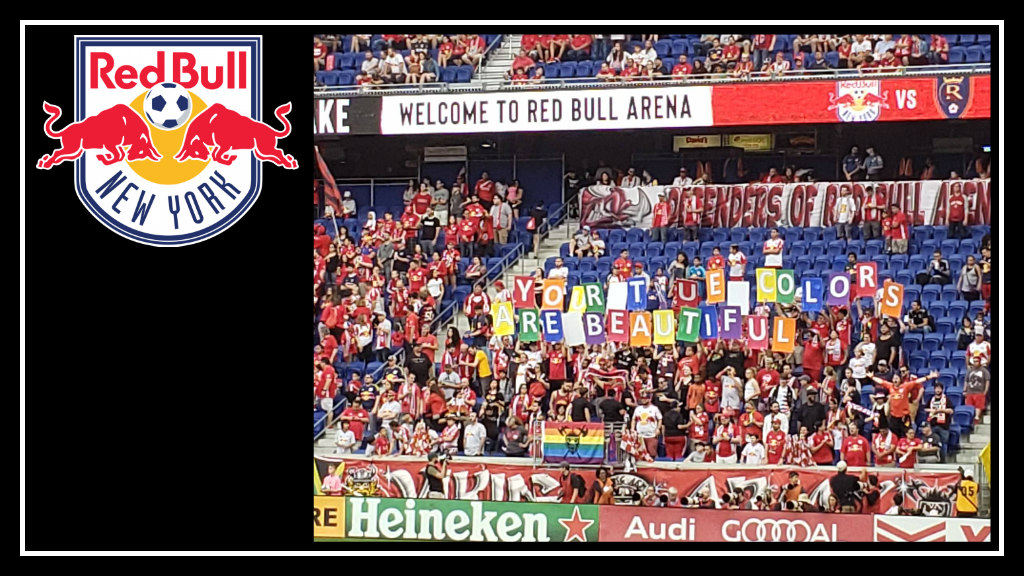 Welcome to June! I hear it likes to bust out all over… but I decided against Broadway musical themes this season, so I’ll just leave that there. The New York Red Bulls hosted Real Salt Lake in a cross-conference match at home in Harrison.

In a world full of people…

From the moment I arrived, there was a celebratory vibe outside the Stadium. There were Cirque du Soleil performers and traditional Portuguese dancers. I walked past a freestyle exhibition and games for kids. Music was playing, and fans were chatting. This is nothing new. But it felt…different. There were more kids than usual, probably indicative of the school year coming to an end. The fans were excited… because they hadn’t seen the team play in a week? Because former RBNY coach Mike Petke was returning to his old stomping grounds? Because fireworks were expected after the match?

Because fireworks of a different sort were expected during the match?

The first half was rather sloppy on both sides of the ball. RBNY had twice as many shots on goal as RSL, but nothing found the back of the net. Red Bulls also had majority of possession, but it didn’t mean much of anything. And while I’ve touched a little bit on what the High Press style means, I may not have pointed out that it actually does not rely on possession. However, I know that in the last few games, the scales have tipped to New York in terms of possession. Maybe I just don’t know what things mean anymore…

Don’t be afraid to let them show…

Just when it may have seemed that nothing was going to happen… a lot of stuff happened. It all started with the forced own goal, courtesy of Michael Amir Murillo, in the 58th minute. Then, before the red smoke cleared, Daniel Royer caught a pass from Alejandro “Kakú” Romero Gamarra and scored the second goal just about one minute later. Not content to have only kinda caused a goal, Murillo came back for more. He scored the third goal in the 64th minute.

And that’s why I love you…

That really could have been the game, just at the 64th minute. Three goals in seven minutes would pretty much do it. Soon after the flurry of goals, defender Amro Tarek had to come off with an injury, with Sean Nealis replacing him. Royer and Alex Muyl made way for Omir Fernandez and Andreas Ivan. In the 83rd minute, Ivan crossed the ball to Fernandez, who buried the ball in the net for one last goal. So yeah– that could have been the game, nearly twenty minutes earlier. But that’s not how RBNY played it. They just kept going. And that is what fans want from their team.

RBNY travel to Talen Energy Stadium next week to face the Philadelphia Union.

(P.S. The kids out there will more likely know the Justin Timberlake/Anna Kendrick rendition for the movie “Trolls.” But this original is the one associated with the Pride movement being celebrated around the league in the month of June.)