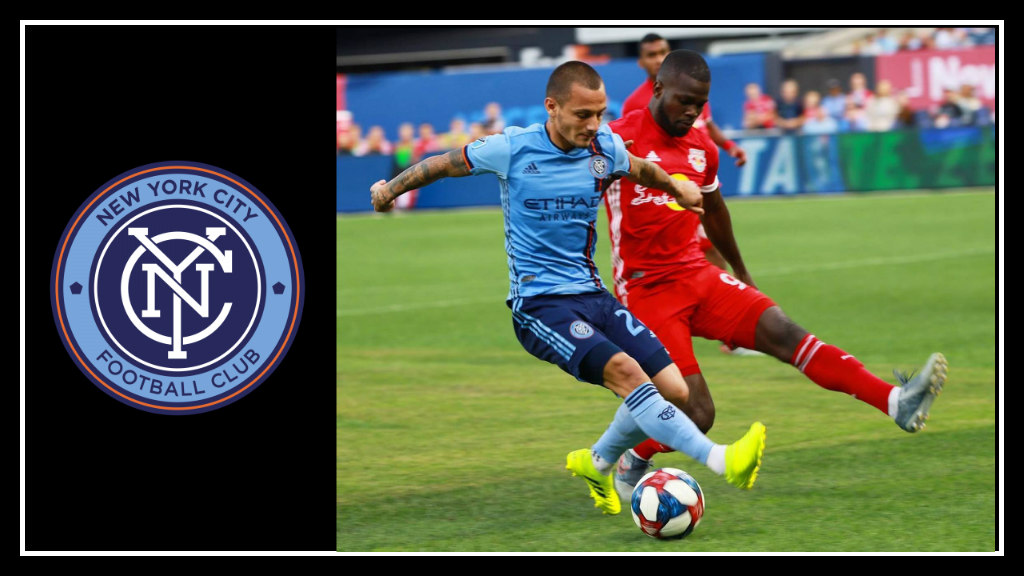 It was NYCFC’s turn to host their regional rival, the New York Red Bulls, during MLS Heineken Rivalry Week.  NYCFC had been on a winning streak, beating both FC Cincinnati and Columbus Crew SC in a congested schedule.

Although City walked onto the pitch with confidence and spring in their step, everything positive was quickly deflated in the the first few minutes.  The predicted runaway train pace of Red Bulls instantly threw a wrench into NYCFC’s plan of tight possession.

Coach Doménec Torrent has been consistent in his post match talks about the type of game that he wants the team to play, and that plan leaves no room for long balls leading to counter attacks.

In the first 25 minutes of the match, much of the New York City squad looked like deer caught in the headlights of the incoming Red Bulls high, hard, and fast press.  Every attempt to string together an attacking sequence met by Red Bulls pressure was cut short, sent long and then the counter-attacking hounds were released.

Alex Muyl, who seems to have taken over the ‘lead bad guy with the bad mustache’ role from Sacha Kljesten, put one past Sean Johnson in the 10th minute off a pass by “Kaku” Romero Gamarra.  It was increasingly frustrating to watch.

Then something happened, and I don’t know what “it” was exactly, but NYCFC seemed to remember that they were a good team and trained for this.

The passing sequences were tight and met by RBNY pressure but City seemed to relax and make calm and smart decisions.  Players remembered to make runs and do crazy things like get open.  Once the offensive spigot opened, NYCFC continued for another good 30 minutes, resulting in a successful PK converted by Maxi Moralez just before half time, and later, a fiery finish off a back heel by Héber in the 53rd minute.

Forward Alexandru Mitrita must be back to full fitness as he oozed speed, accuracy,  vision, and creativity in generating attacking chances. The score could have been much higher for City, had the goal posts and crossbar not gotten in the way at least three times.  Red Bulls keeper Luis Robles also made some unbelievable saves.

The last twenty minutes probably caused many a nail biter, as a revert to old habits with the Red Bulls piercing the midfield and generating attacks were eventually destroyed by either Alex Callens, Maxime Chanot, or Anton Tinnerholm.

Of course  an altercation was inevitable given the heightened emotions of the match. This time is was between Ronald Matarrita, who came into the game with a yellow card and Red Bulls Michael Murillo.  Although Murillo started the head butting sequence, it was solely Matarrita who was caught and booked, leaving NYCFC to play with 10 men in the last 4 minutes of the match.  Fortunately, RBNY were unable to level the game.

Next Saturday (August 31st) NYCFC will now have to face Vancouver Whitecaps, their farthest geographic opponent, without key player Matarrita on the squad. After that schlep, the team will be back home for three consecutive games facing New England, Toronto, and San Jose.

Oh and by the way, New York is blue.