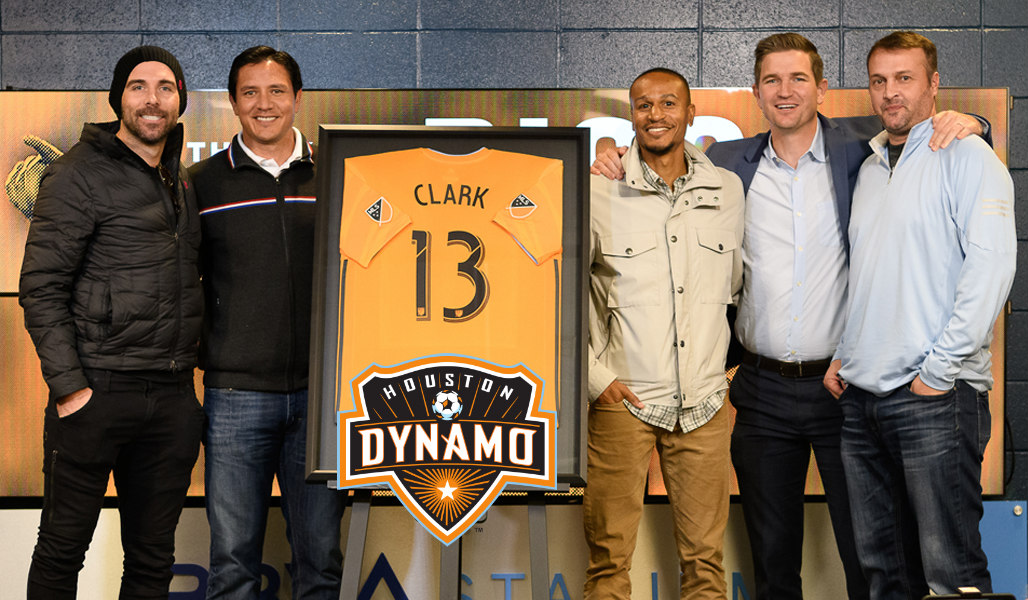 While Ricardo Clark technically left the Houston Dynamo when he was traded to Columbus Crew in the 2017/18 offseason, his influence on the team and the fans remained in the culture of the team. That continued presence was honored last week when it was announced that he would be signing a one-day contract in order to retire from professional soccer as a Houston Dynamo player.

Clark was known for being a bulldog in the midfield and his aggressive style of play led to some legendary moments, the most notable being a record-breaking nine match suspension in 2007 for kicking FC Dallas’s Carlos Ruiz. While the foul was particularly egregious, many players noted that Ruiz often brought more subtle dirty tricks to the pitch that easily elicited that response in such a high-pressure match.

While his card accumulation had tapered by the time I got to watch Clark on the pitch, some of the slowing may have had more to do with his growing intelligence on timing. I recall a similar outburst at yet another match against FC Dallas in 2016. Again, from my seat at Toyota Stadium, the player seemed to have a reckoning coming and my love for Rico as a midfield enforcer grew exponentially that night. The ref missed the action, and Clark got away with the foul – much to my delight.

My husband and I had the opportunity to meet Ricardo Clark at a promotional event in 2017, and I was shocked at what a peaceful and calm demeanor he had. I certainly didn’t expect him to be at gameday intensity in the middle of a wine tasting at Kroger, but the chill vibe coming off of him was impressive, and he was kind and gracious to everyone in attendance.

While Clark wasn’t playing for Houston, he maintained his home here and his son plays for the Dynamo academy. And while he is retiring with the Houston Dynamo, his time with the club will carry on as he has signed on as a coach for that same Academy. His reach into the first team also continues with newly inked goalkeeper Cory Cropper, who grew up in Georgia where his father had coached Clark on his high school squad. Cropper recalls in a recent article running behind Rico as a young player and has been honored to play opposite Rico on the pitch.

I’m thrilled that Rico is remaining a part of the Houston Dynamo family and hope to get my own kid a little coaching time with him if the opportunity arises. I’ll have my eye out for him at DynamOpening day on the 29th and look forward to seeing his legacy of intensity play out against the Galaxy.