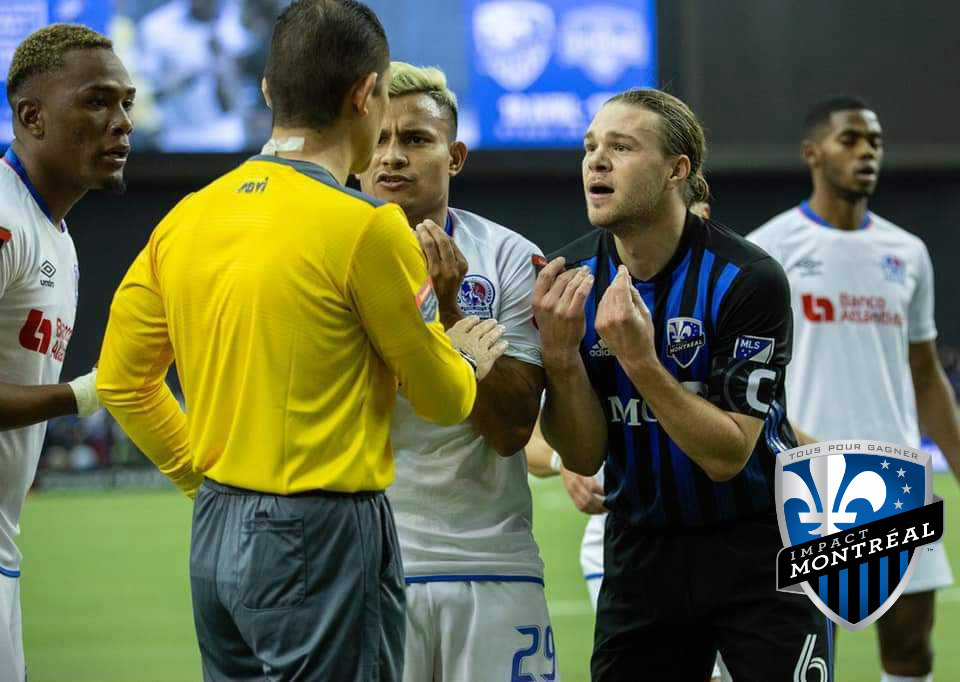 Much as in Dallas, the match against Olimpia was a tale of two halves. Considered the superior team on paper, especially with DP Victor Wanyama making his debut, many onlookers entered the match with a sort of confidence than can prove fatal. Indeed, the Impact’s first 45 minutes of play were some of the worst seen in some time – certainly the worst under Thierry Henry’s tenure. Eons of sterile possession passing back and forth in front of Olimpia’s 18-yard box only to be caught sleeping on a goal kick and a counter-attack left the Impact down 2-0 in front of a stunned Stade Olympique.

Club president Kevin Gilmore regularly talks about the emotion experienced between a team and its fans in soccer. If ever there were a match to prove his point, this was it. After a dismal 45 minutes, it was impossible to say whether the Impact – undoubtedly fatigued after a road trip to Dallas and with a nearly-identical starting 11 – had the grinta and the energy to come out swinging.

It didn’t take long for Saphir Taïder to light the much-needed spark. On the half volley, Taïder hit a magnificent shot that lasered into the net from 30 yards out, bringing the Impact back within one.

The stadium exploded. Taïder’s fantastic strike combined with the addition of X-Factor attacker Orji Okwonkwo doing his best Adama Traore impression seemed to reinvigorate supporters and players alike. Bolstered by the chants that increased in volume and fervor as the half wore on, the Impact proceeded to lay siege to Olimpia’s 18-yard box. Thierry Henry threw on his two most attack-minded options in Anthony Jackson-Hamel and Ballou Tabla, two homegrown players who had everything to prove, each of whom delivered their most committed performance in a Montreal jersey to date.

All to culminate in a moment of pure, unadulterated madness that can only exist in CONCACAF in the 83rd minute. As Jackson-Hamel headed the ball in to the box, it struck the arm of an Olimpia player. The referee pointed to the spot without hesitation – Impact penalty. The feverish crowd celebrated as if the spot-kick was already converted. The Olimpia players descended to plead their case. Then the linesman got involved. Surrounded by Impact and Olimpia players jostling to get a word in edgewise, the referee changed his decision. No penalty, and eventually a corner kick.

The stadium erupted again as boos and jeers rained down toward the officials. The Montreal Impact and its supporters have long adopted an “us against the world” stance built on a long list of moments like this one and supporters were quick to verbalize their dissent. And as the match ended as a 2-1 upset by the visitors, a roller coaster of an electric night came to an end.

With no MLS match this weekend, the Impact have ample time to prepare for a match in one of the most hostile environments in Central America – the infamous San Pedro Sula stadium. Known for their ability to pull out their best performances with their backs against the wall, if the Impact can play 90 minutes with the same rage au ventre the players showed in the second half of last night’s match, they have every chance to overcome their opponent.