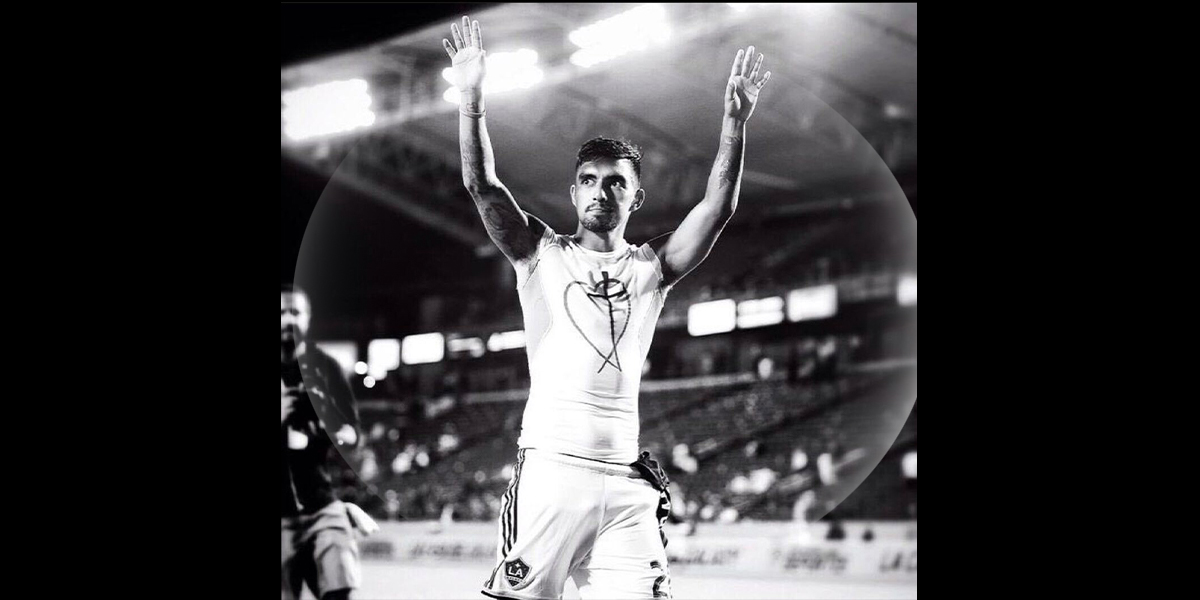 AJ DeLaGarza is known and beloved as a former three-time MLS Cup champion while with the Los Angeles Galaxy. In 2014, many fans followed his son Luca’s story when he was born with a rare heart defect, Hypoplastic left heart syndrome (HLHS), which he died from on September 4, a week after being born. In his son’s memory, the Luca Knows Heart Foundation was established to help other families who are affected by the condition.

Switch the Pitch official LA Galaxy reporter, Michelle Huitink, had the opportunity to correspond with Luca Knows Heart (LKH). LKH went above and beyond and sharing the foundation’s story and photos of their latest merchandise. Their interview follows.

Michelle Huitink: You’ve got a great selection of merchandise, how did you decide the design and which products to sell? How long does it take to replenish products that sell out?

Luca Knows Heart: Our design came from a tattoo that AJ got the very first day we were told that Luca would be born with a congenital heart defect. The design is significant because it was always a reminder to have faith in Luca’s heart during the remainder of the pregnancy. We came up with the slogan Luca Knows Heart to be able to share our story with family and friends, and it just kept growing into what ultimately reached the entire Major League Soccer fan base.

Since we are a new company we are figuring out the fashion industry as we go and we know it is all a learning process because neither of us have a background in fashion. Since we once were the parents going through the unknown of having a child that would be born with a heart defect, we tend to design clothing that we would wear ourselves and we think that’s the best way to reach a broader audience.

As of now, we will not be replenishing anything that has sold out. Our goal is to continue to drop new products though and we can only do that with everyone’s support. We want to keep our brand fresh and exciting for both moms, dads, and kids so updating our designs is our way of doing that.

MH: Since you started it, how has the project grown and how much awareness has it brought to the condition and helped other families?

LKH:  We’ve always had big dreams and ideas for ways to help other families dealing with CHD and honoring Luca’s life. With the help of good friends and different organizations, we’ve held blood drives benefiting CHLA (Children’s Hospital Los Angeles), supply donation drives benefiting RMH (Ronald McDonald House), just regular fundraising supporting the Heart Center at CHLA, and a scholarship fund at my alma mater UMD (University of Maryland). We’ve grown creatively through the launch of the clothing line. We think this is a good way to spread awareness about CHD (congenital heart defect) in Luca’s honor to people who aren’t necessarily affected by it. Anyone can rock a cool heart shirt and when someone asks about it, it’s an easy way to share our story.

MH: You make yourself quite available to fans and are very generous yourself because you’ve set up the Luca Wyatt DeLaGarza Scholarship Fund as well, how would you like to see the charity expand?

LKH: We are always finding new ways to keep Luca’s name alive and this scholarship fund was a way to do that while also helping kids from our city that are also going to attend our Alma Mater, University of Maryland. In the future, we would like to make Luca Knows Heart a tax-deductible charity but as of now, we donate to charities that are close to our hearts such as Children’s Hospital Los Angeles and Ronald McDonald House.

MH: Fans can get involved with the Heart Institute at Children’s Hospital Los Angeles and Ronald Mc Donald House, but what message would you have for them and how would you like fans to contribute or do more to help?

LKH: Fans can continue supporting in many ways. Blood donations can be lifesaving and are always needed. Type O individuals are “universal donors,” so there’s always a great need for O donors. Fans can also get involved with the Ronald McDonald House by providing a dinner for families at the House, or holding a “wish list drive” benefiting the House by collecting donations at school or at the office.

MH: Since we spoke about Luca’s condition in 2014, and your subsequent charity to help those with HLHS, and the site for “Luca Knows Heart,” what more do you want people to know about it?

LKH: First and foremost, we are so appreciative of the support we’ve received. It has not only helped us personally cope with our loss, but it’s given us a platform to share our story, spread awareness and help others. Whether you have bought any products from our online store or donated blood, we are in this to help other families and children and we could not do any of this without your help and generosity.

MH:  Los Angeles Galaxy fans regret that you were traded, if given the chance would you come back to play for LA Galaxy?

AJ DeLaGarza: I would never close that out as a possibility. I definitely gave a lot to the club and city of Los Angeles and would make a return if it made sense for my family and me at this point in my career.

AJ DeLaGarza has since been transferred to Inter Miami CF and retired from international soccer with the USA and Guam. We look forward to seeing him on the pitch again and wish him and his family the best.

Check out https://lucaknowsheart.com/ for more information, and there’s currently a 50% discount.

Luca Knows Heart offers a variety of styles to fit men, women, and children. Dress comfortably and to impress.