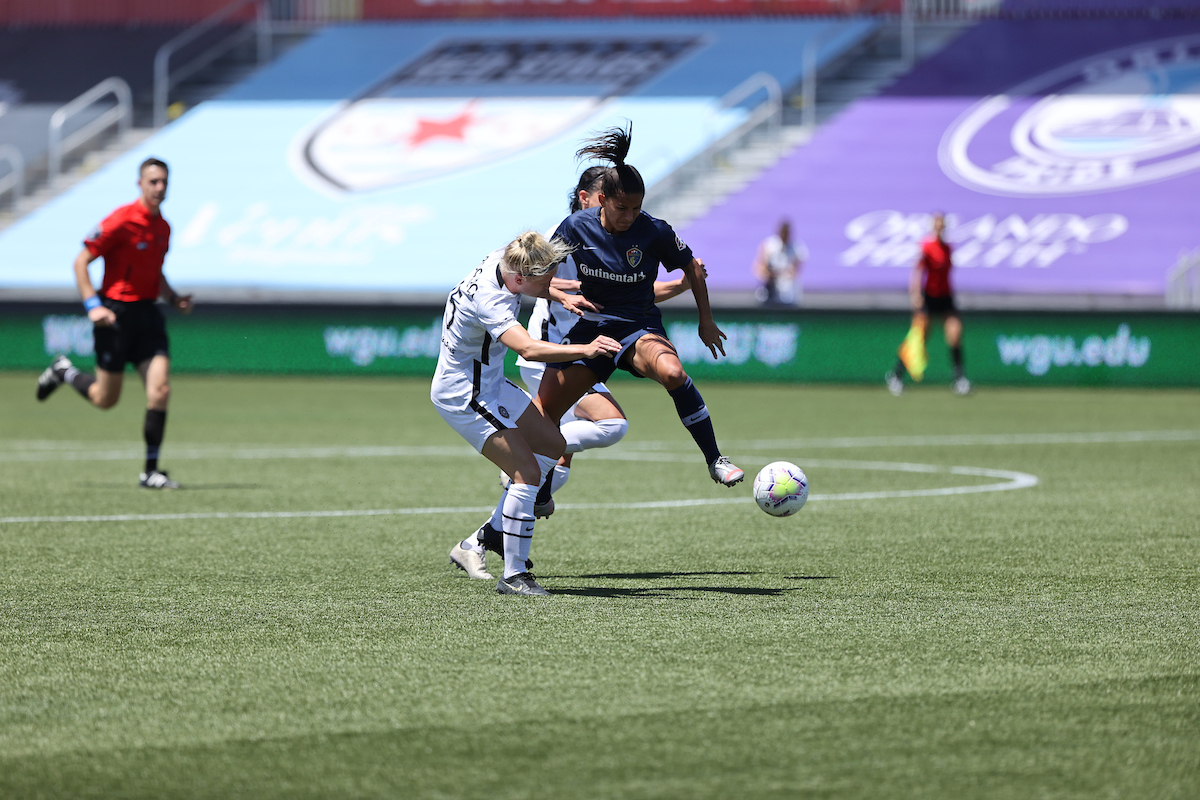 Professional sports are back! The first game of the 2020 NWSL Challenge Cup kicked off June 27th at 12:30 PM EST at Zions Banks Stadium with the Portland Thorns taking on the North Carolina Courage. These two teams are NWSL royalty. Combined they have won the past 3 NWSL championships and each team is filled with both international and domestic stars.

Both teams came out flying, and as the game progressed, they settled into a very back and forth style. North Carolina showed its team culture of confidence, encouraging all their players to get forward as the ball was sent wide. Portland took a composed route, as they tried to utilize combinations in the middle, letting players like Horan and Rodriguez shine. Both teams’ strategies worked very well as each team had solid opportunities.

Some attacking strategy highlights come from Portland utilizing Linsdey Horan’s dominance in the air, her teammates repeatedly putting the ball in position for her to get her head on it. North Carolina’s Lynn Williams (2016 NWSL Golden Boot winner & Most Valuable Player), showed off her incredible skill going one-on-one in the box and creating multiple opportunities.

The first goal of the game came from the North Carolina Courage in the 74′ with Hailie Mace showing off her speed. Mace chased down a ball on the right flank, driving it downfield, and then crossing into Debinha’s perfectly time run as she tapped it in.

Portland was quick to reply in the 80′. Lindsey Horan got her head involved in a set-piece that NC Courage goalkeeper Stephanie Labbe tipped onto the crossbar. However, the Courage did not clear the rebound off the crossbar, and Portland forward Simone Charley found the equalizer.

North Carolina did not settle for the draw as Lynn Williams put her head on a perfectly driven ball by US International Sam Mewis in the 90′ +4′. Six minutes of stoppage time was added due to a head-on head collision between Samantha Mewis and Lindsey Horan; fortunately, both players are uninjured.

Overall, it was a great game with many opportunities for both teams. The five-sub rule allowed each team to showcase their youth players and gain important minutes.

Of course, I have to give a shoutout to Morgan Weaver of Portland for her NWSL debut, she is an alumna of my university and is making us at WSU proud (go Cougs!).

Before this game even started one of the most powerful moments I have seen in sports occurred. While kneeling during the national anthem in honor of the Black Lives Matter movement, as most players have done in this tournament, Chicago teammates Julie Ertz and Casey Short were seen holding each other and crying. This powerful, emotion-filled moment transcends sports.

From the beginning of the match, Rose Lavelle flourished in her role as the crafty 8. In the 8′, she explosively dribbled down the middle of the pitch, slipped a through ball to Ashley Hatch, and fired the keepers rebound into the top right corner.

The rest of the first half was fairly quiet, with a handful of opportunities for both sides, but we were far from finished. The Spirit came out energized in the second half. Just 30 seconds in, Ashley Hatch capitalized off of a long touch by goalkeeper Alyssa Naeher, blocking her attempt to pass the ball out, resulting in a goal for the forward.

Chicago got on the board in the 51′ as Morgan Gautrat (formerly Brian) fired a shot into the bottom left corner from 15 yards out.
St Georges had a very good opportunity to tie the game in the 89′ as she was one on one with Audrey Bledsoe, but the keeper made an amazing save to keep Washington’s lead. The Spirit countered with multiple chances in the dying minutes but did not convert any of them.

The match finished 2-1 with the Spirit taking all three points. They are currently tied with the North Carolina Courage for the number one seed

Kealia Watt was an explosive player on the field, showing off her skill. Although she did not find the back of the net she gives Chicago fans hope that she will fill the vacancy that Sam Kerr left.

Another big rookie debut was Ashley Sanchez for the Spirit. Sanchez was the fourth overall pick of the 2020 draft out of UCLA. She has represented the youth national teams and set or tied 7 school records at UCLA. This dynamic forward played all 90 minutes. Sanchez had a couple of opportunities on goal, but seemed hesitant to take the shot, instead opting for an extra touch. She will be a player to watch, and I am excited to see her confidence grow.