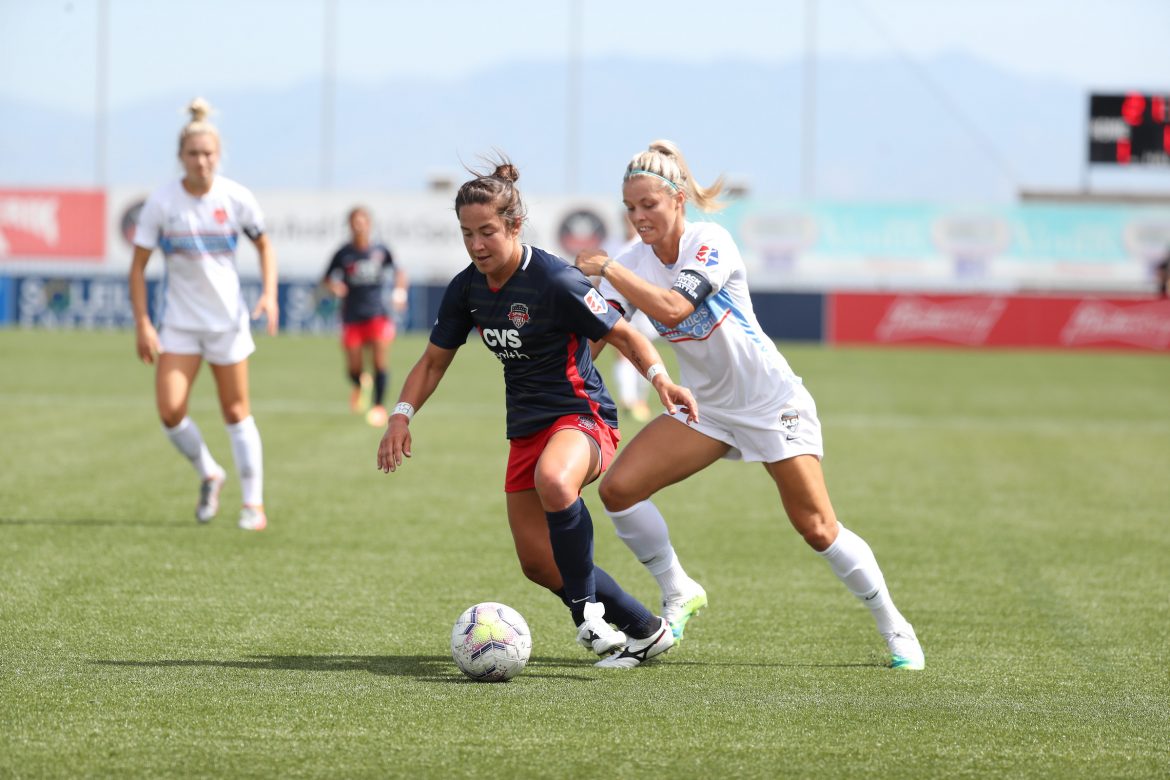 The Washington Spirit (1-1-1) and the Houston Dash (1-1-1) kicked off the fourth round of preliminary matches on Sunday. For each team, this was the last chance at earning a higher seed for the playoff portion of the tournament.

Washington’s Rose Lavelle had been listed as questionable, leading everyone to believe she was being rested for the playoffs. However, she was later marked out with an ankle injury, a concerning revelation for Spirit.

The Spirit dominated all aspects of the score sheet, putting 8 shots on goal to Houston’s 1, with 59 percent of the possession, and nearly 200 more completed passes than the Dash.

In the 16′, Washington Spirit’s Bayley Feist scored the only goal of the game, a low rocket of a shot into the bottom left corner from 18 yards out. This was the Wake Forest alum’s second NWSL career goal. Forward Ashley Hatch got the assist.

In the 51’ UWSNT and Spirit midfielder Andi Sullivan was substituted out after going down with an injury. The trainer told coach Richie Burke that it is not her ACL — a huge sigh of relief for NWSL fans. She has had a persistent meniscus problem and results from her MRI on Monday revealed a tear. Sullivan will undergo surgery on Thursday and will be out for three to six months. We wish her all the best on her recovery!

Utah’s Amy Joy Rodriguez and Kelly O’Hara get a well-deserved break as they were sidelined for this match. However, Chicago came in with a very strong lineup. USWNT centerback Tierna Davidson made her first appearance of the tournament, the final tune-up before playoffs, after being sidelined with an injury.

Prior to the game, Chicago defender Sarah Gorden launched a “Pass It On” challenge to donate money for “Get Yo Mind Right Chi”, a mental health initiative in Chicago’s Pilsen neighborhood. She pledged to donate $5 for every pass she completed during this match. She challenged her other teammates and many joined, including Kealia Watt who pledged $100 for every time coach Rory Dames yelled at the squad during the game, up to $2,500. (To learn more and donate, visit http://www.healthyhoodchi.com/)

Right before the first-half hydration break, Utah had their first real chance of the game. Brittany Radcliffe and Arielle Ship played a great give and go, which set up Ship for a chance from the top of the 18. She fired a shot, causing Alyssa Naeher to make a reaching save and push it out for a corner.

The first half for Chicago was shaky. On paper this team is elite– they have so much talent. However, they have not come together in the way everyone had hoped. One highlight from their attack comes from the left side with Casey Short and Kealia Watt working together to stretch the field and provide opportunities.

Just before halftime, midfielder Morgan Brian went down with a lower leg injury after a collision with Utah keeper Abby Smith. In order to preserve the two windows Chicago had left to make their substitutions (Taylor Leach had to be replaced in the 26′ due to injury), Brian held on for the remainder of the half and was later replaced by Katie Johnson.

Chicago scored the lone goal of the game, late in the 85’, when Casey Short headed in a cross from Savannah McCaskill. This was only Chicago’s second goal of the tournament, but led them to their first win.

The preliminary rounds wrap up on Monday with OL Reign facing Portland Thorns and North Carolina Courage facing Sky Blue. Then… Playoffs! The first round is set for Friday, July 17th.