MLS is Back, July 17: Minnesota and Salt Lake Fight for Group of Death Stalemate 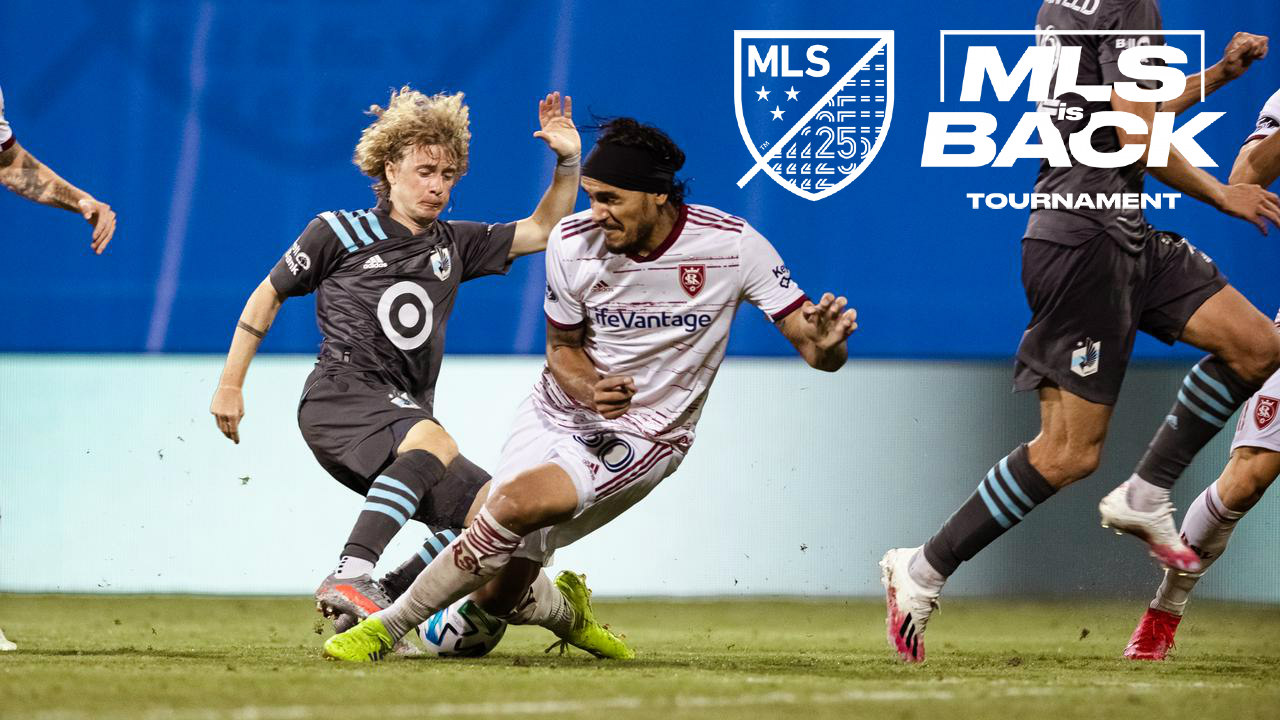 Group D’s leaders faced off late Friday night, looking to gain an edge going into the third and final match of the stage. Minnesota United FC played the honorary host to first place Real Salt Lake, and it was precisely what you’d expect from two top teams: A slogging 90 minutes with the total shots on goal outnumbered by the bodies going to ground.

The Loons’ lineup was a bit different from the opening round, with two of their three strikers on the ‘matchday decision’ list. Aaron Schoenfeld got the start up top and Ozzie Alonso returned to the 10 spot. They also wore the famed Wing Kit for the first time since its triumphant MLS reveal. Minnesota got off to a quick start with the beautiful workmanship of Kevin Molino and Ethan Finlay on the right hand side. Alonso met the ball outside the box, but his shot went wide.

On the other side, Corey Baird presented a midfield threat, as did Damir Kreilach ahead of him. Both found opportunities to answer the Loons’ opening shot, but an offside call and a blocked shot kept it scoreless. The next 40-plus minutes of the half saw midfield scuffles, questionable challenges and bowling pin-like falls from both teams. Justen Meram coming on for a hobbled Rusnak just before the break changed the tone a little and both keepers faced some rockets before and after the break.

The second half saw justice for the #FreeChacon crowd, with the Young DP replacing Molino. He did not make the impact everyone had hoped, but he did force a leaping save from Zac MacMath. Both squads continued to struggle to pull together lethal plays and few individuals would stand out for heroics.

Despite subs across the pitch (Amarilla for Schoenfeld, Hassani Dotson for Finlay and, later, Raheem Edwards for Lod), the Loons could not find the break they needed. But neither could Salt Lake. The late-night feature was more like a college defensive scrimmage than a showdown between group leaders. The goalkeeper battle seems to be a theme in this tournament, whether zero or seven goals are conceded across 90 minutes. These squads will take what they can get. One point apiece sets them up well for the third and final match.

The leaders return to the pitch on Wednesday, July 22. Real Salt Lake will host a buzzing Sporting Kansas City at 9:00 AM EST while Minnesota United FC will meet a Colorado Rapids squad – depleted of both points and personnel – under the lights at 10:30 PM EST.