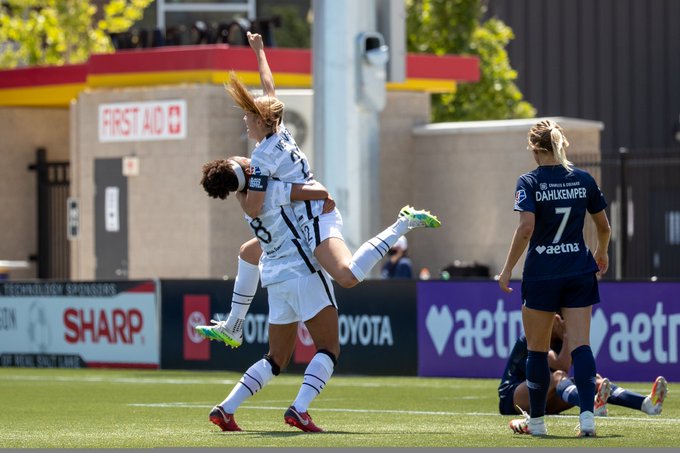 Portland goalkeeper Bella Bixby was ruled out for her team’s quarterfinal match against NC Courage. Earlier in the week, Bixby sustained a non-contact knee injury during training. It was later revealed in her MRI that the injury was actually a partial ACL tear. We wish Bella a speedy recovery and cannot wait to see her back on the pitch!

The lone goal of the match came from Portland’s rookie forward Morgan Weaver out of Washington State (go Cougs! – yes I am officially the Morgan Weaver fan club president). She snuck in behind North Carolina’s defense and tapped in a pass from Rocky Rodriguez. This was a huge moment in the NWSL; not just because a rookie scored their first goal, but because Weaver was the first player to celebrate on the infamous slide post-game.

Playing against the most intimidating offense in the league was not a challenge for Portland’s goalkeeper Eckerstrom. She stepped up and made amazing saves, including stopping a North Carolina freekick with a jumping one-handed save to hold onto the lead in the 78th minute. It cannot be stressed enough how spectacular her performance was; she made 8 saves to keep the Thorn’s clean sheet.

One of the (many) reasons to love the NWSL is parity. You cannot predict these outcomes. The #8 seed knocking out the undefeated #1 seed, with their rookie forward scoring the game-winner storyline, is exactly why so many of us got into sports. It’s magic.

This game was a big one for both the Dash and the Royals; neither have competed in any NWSL playoff game before. Emotions were high, and both teams played with their hearts on their sleeve. As the game went on, it turned physical, with a total of 6 yellow cards issued.

In the 7th minute, goalkeeper Abby Smith took out a Houston forward at the top of the box and was booked with a yellow. It was a controversial call by the referee and when viewed in slow-motion it can clearly be seen that the foul occurred inside the box. Since the foul was a denial of an obvious goal-scoring opportunity, Smith should have been given a red card if the referee stuck to the original judgment of the foul taking place outside the box, to avoid double jeopardy.

While both the Dash and Royals had solid opportunities on goal, this was a showdown between goalkeepers, each making multiple saves to keep a clean sheet. Of course, the game ended up going into penalty kicks right after regulation time since there is no extra time in this tournament.

Utah’s captain, Amy Rodriguez, was up first and missed her penalty, setting the tone. Houston’s Jane Campbell came up huge in the shootout, saving two Utah penalties (Corsie and Vero). Houston’s first three penalties were perfect, but Visalli’s shot was stopped by Utah keeper Abby Smith. Even with the error by Visalli, the Dash prevailed with the best out of five penalty kicks to win the match.

Houston moves on and will play the Portland Thorns on Wednesday, July 22 at 12:30 pm EST.