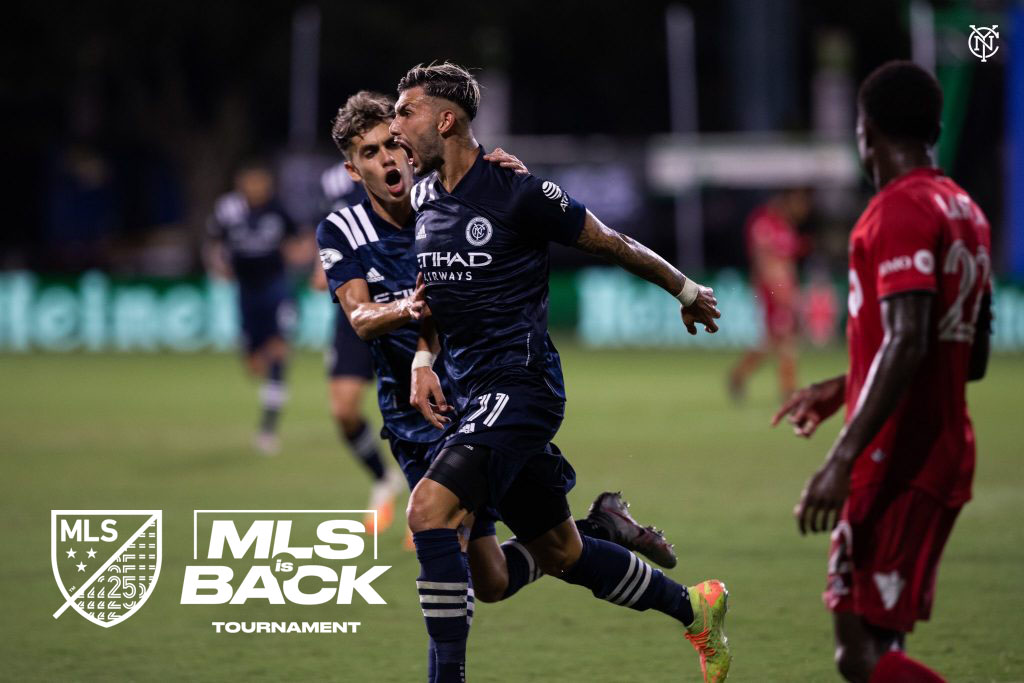 Storms were brewing not only in the atmosphere near Orlando, but also on the pitch that New York City FC and Toronto FC walked onto Sunday night for the MLS is Back Tournament. The two teams’ short history has been full of drama, heartbreak (for City), and triumph (for Toronto). TFC eliminated NYCFC in the 2016 and 2019 MLS playoffs. They did so with an aggregate score of 7-0 in 2016. They again broke City supporters’ hearts in 2019 when City was poised to make a deep run for the MLS Cup. To say that everything was on the line for both teams on Sunday was an understatement.

New York City FC wasted no time showing Toronto FC that a victory would not be easy. Merely five minutes into the game, a free kick taken by Ronald Matarrita sent the ball in toward Anton Tinnerholm. Tinnerholm was able to redirect it to Jesus Medina who blasted it into the netting to give New York City an early lead. Toronto FC scrambled to collect themselves and attempt to turn possession in their favor.

In the midfield, a sandstorm was in effect that prevented many Toronto players from executing any sort of play. NYCFC Homegrown James Sands shut down both offensive and defensive plays. In 90 minutes, he won three out of three dribbles, ten duels, had an 88.2% pass completion, won five tackles, blocked two shots, and intercepted three passes. Toronto FC captain Michael Bradley was invisible for most of the match, unable to coordinate plays by any means. And no New York City FC game is complete without a yellow card being issued to captain Alexander Ring. The card received at the 12th minute was the 35th yellow the Ringmaster had collected in four years, the most of any MLS player.

After a yellow card shown to Toronto’s Omar Gonzalez, a hydration break, Ismael Tajouri-Shradi being subbed off for an injury and Maximiliano Moralez coming in, halftime approached with little action. The second half started out strong in Toronto’s favor, but the tide quickly turned for City as soon as Maxi gifted a beautiful assist into the path of Valentin Castellanos. A shot too powerful for Quentin Westberg to stop sailed past his fingertips and into the goal in the 55th minute.

Desperate to level the playing field, Toronto FC subbed in Jozy Altidore, Erickson Gallardo, and Jonathan Osorio. New York City FC kept the attacks coming by subbing in their own offensive players such as Keaton Parks, Gary Mackay-Steven, and Héber. No sooner had the City subs hit the pitch did they link up and orchestrate a beautiful symphony of movements. Mackay-Steven lunged at a ball nearly out of play that rolled right into Héber’s feet. Rather than turning and taking a shot, a clever back-heel pass found Maxi open and he was able to bury the final goal of the night for NYCFC (the crossbar would prove to be NYCFC’s greatest enemy, denying Héber two goals within a few minutes of each other).

Unfortunately, New York City FC was not able to air their dirty laundry against Toronto FC with a clean sheet. In the 87th minute, Patrick Mullins betrayed his old squad by slotting an assist from Jozy Altidore into the back of the net. But his late goal was not enough to motivate Toronto to equalize the game and, in an unbelievable turn of events, New York City FC defeated Toronto 3-1 to move on to the quarterfinals of the tournament.

Their opponent will be determined Tuesday, July 28th at 10:30 pm EST as Portland Timbers face off against FC Cincinnati.