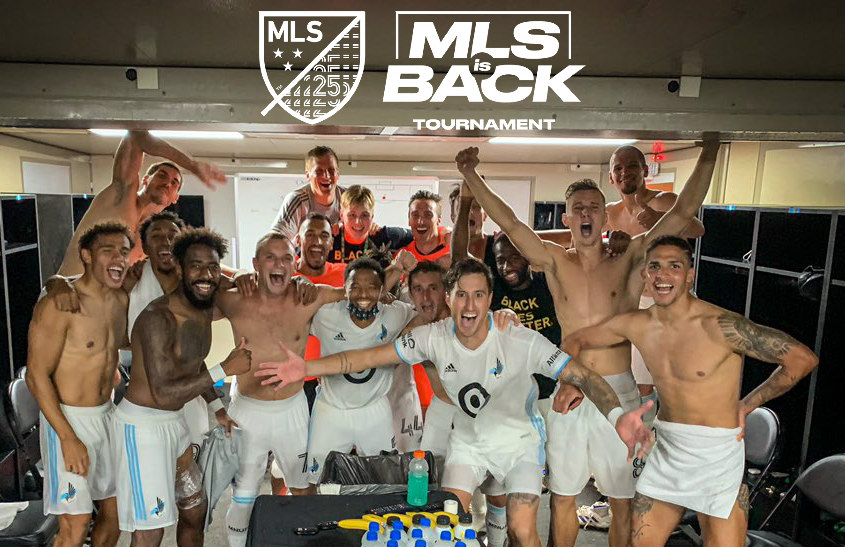 Anything can happen when a decent Minnesota team meets a strong team from, well, anywhere. Tuesday night’s knockout matchup was no different, with Caleb Porter’s technically solid Columbus Crew ‘hosting’ a Minnesota United squad that has faced some adversity from day one of the MLS is Back Tournament. The final result is a textbook example of how Adrian Heath’s team – and this tournament – is anything but textbook.

Columbus came out ahead in possession, passing, and shooting. On paper, as in Vegas, Porter’s side was the clear favorite in both halves.

What the numbers do not show is Minnesota’s ability to exploit chaos and confusion in the box on set pieces. A tactic that was largely used against them at the beginning of their MLS tenure, the Loons have since mastered the art of the corner kick and it has been key to their undefeated record in 2020. Ethan Finlay gave us one example last week and nearly repeated it on Tuesday. Given the number of corner kick goals that were scored by Minnesota defenders last season, the fact that another player bagged this one is not a surprise. The surprise this time was that it was… Robin Lod?

The quiet left winger (of which the Loons have a few) has taken the brunt of fans’ ire these last few weeks. The Finn has skied his fair share of shots and one fan likened his first touch in this match to that of a cinder block. However, if Lod were not to take such chances, the Loons and their fans would have little to hang their hats (scarves?) on after this match.

The early goal, in the 18th minute, buoyed a stale Loons attack. Forward Luis Amarilla, getting his first start in the tournament, was all but absent and Columbus had clearly studied all of Finlay’s connections on the right wing. Midfielders Ozzie Alonso, Hasanni Dotson, and Jan Gregus worked to find space, but corner kicks were practically the only time the Loons had possession in the final third.

Backup centerback, Jose Aja, who has cemented his place in Minnesota’s back four in the absence of league veteran Ike Opara, was at fault for the foul that awarded Columbus the equalizing penalty kick. A very late and unnecessary challenge on Lucas Zelarayan drew the call. Tired legs were no doubt a factor– Aja had held off the Crew’s utilitarian attack for 78 minutes with few runs forward. But a split-second decision cost the Loons’ their lead and thrust the question of their tournament future into the realm of luck.

Luck has played a large role in Minnesota’s MLS is Back Tournament results. Draws with Real Salt Lake (0-0) and Colorado Rapids (2-2) are bookended by two wins that were all but lost on paper. The shooting maps for the 2-1 win over Sporting Kansas City and this shootout win against Columbus Crew shows the importance of each and every shot taken.

Columbus Crew had every advantage on paper, but only a penalty kick registered on the scoreboard. Neither side could find a run of play goal, but Lod’s vision saved the day, a whole hour before Minnesota knew how badly the day needed saving. Set pieces are no longer dreaded, but rather are Minnesota’s talisman. A problem solver for a team that is often without a true playmaker leading the attack.

The Loons will need every scrap of creative chaos they can muster going into the quarterfinals. Minnesota United FC face the San Jose Earthquakes on August 1st. Kickoff is set for 8 pm EST on ESPN.