MLS is Back, August 1: Minnesota Shakes Off San Jose For A Semifinal Berth 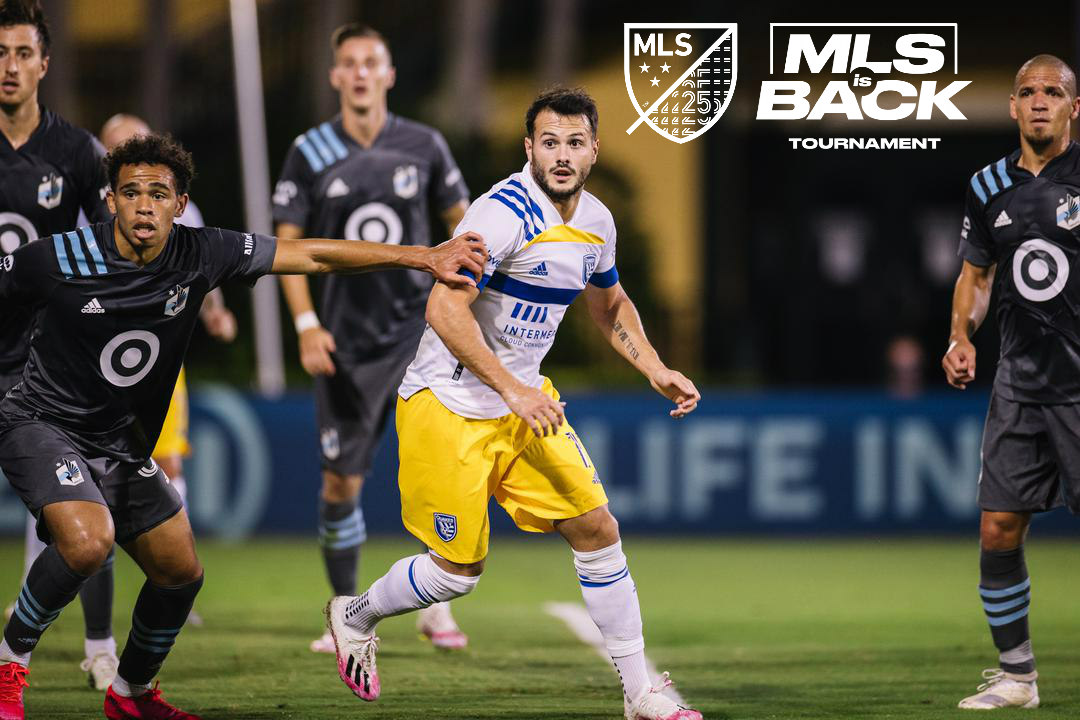 Checking in with ESPN’s Jon Champion from the sideline in the 75th minute with a 3-1 lead, Adrian Heath was asked about his second half plan. “Well, it’s one of them innit,” said Minnesota’s gaffer. He explained that, for both sides, “the next goal is going to be crucial.” In fact, they all were.

Ahead of the quarterfinal match, Heath hinted at his game plan: “We think we’re well prepared for what they will do. The secret is, try and keep them at bay for long enough periods and maybe get a goal on the counterattack, and work from there. Because, as they proved in this tournament, once they get a head of steam up, they’re very difficult to stop.”

While the Quakes came into this match the favorites, midfielder Cristian Espinoza had a home loss to the Loons on his mind, telling Centerline Soccer, “Unfortunately, we were not able to score all the shots we took [in the game on March 7]. However, we need to approach this new game on Saturday with the same intensity and energy that we’ve been doing, and we’re just hopeful we’re able to complete the touches and the goals in the final third and be able to win the game.”

That’s how this match became a classic battle of tactics. San Jose may have had the momentum coming in, and maintained it against Minnesota with possession and forward pressure, but Heath’s side capitalized on positioning and counterattacks. There was not a tell-tale switch of momentum or a distinct collapse in tactics. The Quakes simply could not get off a clean shot in the final third as Espinoza had hoped, and the Loons sucked all the wind out of their sails, again and again.

While the Loons held just 35 percent of the possession, they took 20 shots to the Quakes’ 16. Of the 14 Loons who played on Saturday evening, 12 put in at least 1 shot– Set-piece master Jan Gregus led with 4. But this wasn’t a Minnesota squad sending desperate balls toward goal under pressure as they’ve been wont to do in the past. The 4-1 scoreline was a concerted effort.

Robin Lod had a goal and an assist. Defenders Hassani Dotson (filling in at rightback for Romain Metanire) and Jose Aja each had an assist. Midfielder Jacori Hayes scored the second goal, just 90 seconds after Lod’s opener, in his first start for the Loons. Striker Luis Amarilla finally notched his first of the tournament, a stunner of a team goal in the 56′. And another newcomer, Marlon Hairston, firmly shut the door on the Quakes with his goal in the 86′.

The only big test for goalkeeper Tyler Miller was a penalty kick in the 50th minute, after VAR confirmed a handball from Hayes inside the 18. Magnus Eriksson easily converted the penalty to halve his side’s deficit, but the 2-1 margin was the closest the Earthquakes would come to a comeback. Much like their last meeting in that second match of the regular season, the Loons ran away with it from there.

Valeri “Vako” Qazaishvili was San Jose’s best hope, but the man who’d scored the second consolation goal in that March could not beat Dotson. Seven forced shots (just one on goal) were his only consolation on Saturday evening. Espinoza was also easily neutralized, as was Bloomington, MN, native Jackson Yueill. The USMNT midfielder had been a highlight of the MLS is Back Tournament, but was practically invisible against Minnesota.

Minnesota fans may have missed Metanire and Kevin Molino in these last two matches, but they will not resent the absences after Saturday’s performance. The Loons have some time to rest and recover before their semifinal match on Thursday. Minnesota faces Molino and Heath’s former club, Orlando City FC, in what is sure to be a marquee event. The broadcast begins at 8 EST on ESPN2.