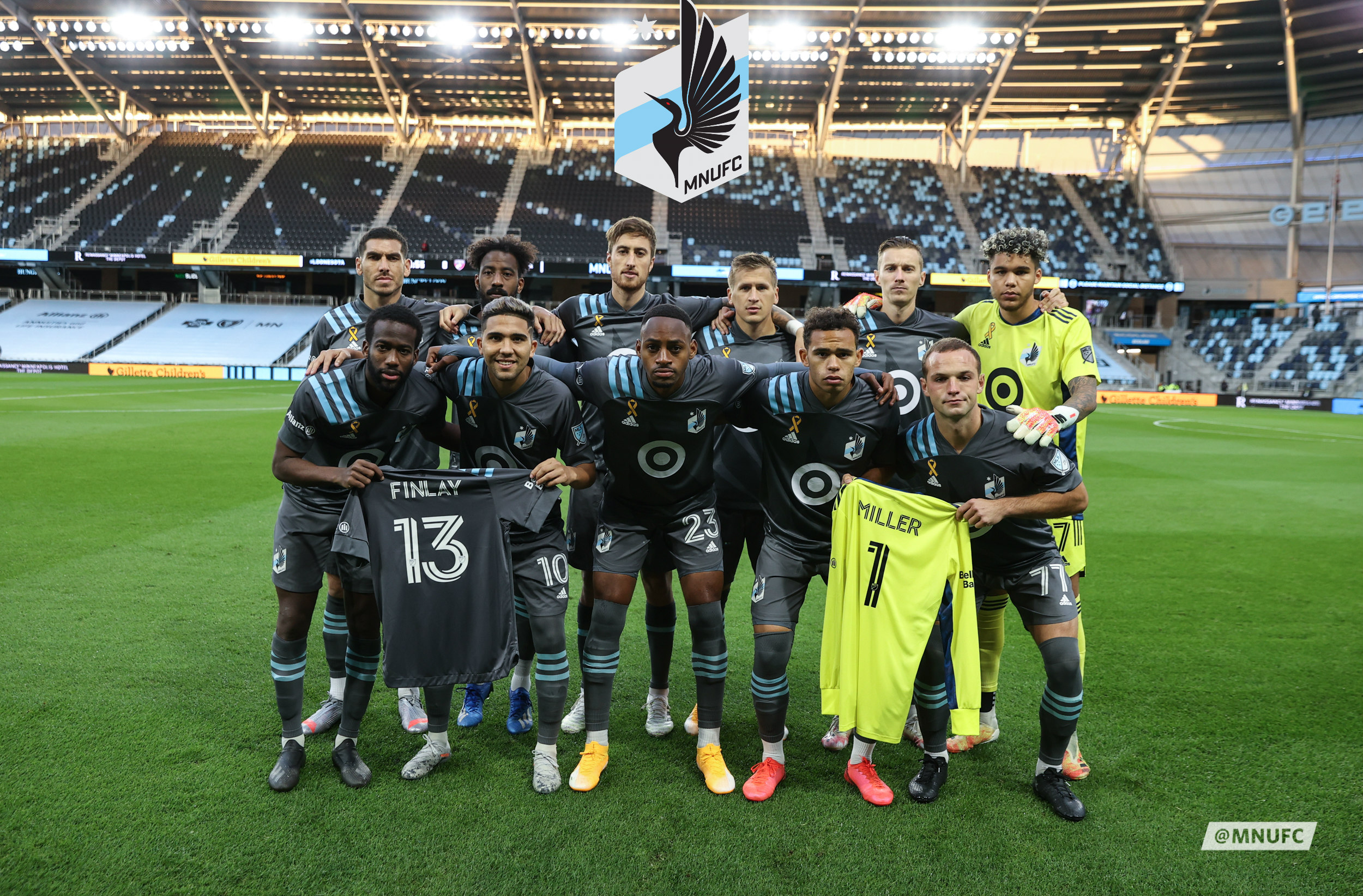 Minnesota United FC, eight matches into Phase Two, returns to Allianz Field on Sunday with a 2-1-5 post-Orlando record and a winless streak that the club has not seen since 2018. If Supporters can take any solace from that record going into Sunday, it would be that those two wins came at home, on the backs of two unique character revealing performances — one of them a 4-0 shutout against Sunday’s opponent. However, much like 2018, there are plenty of things to be concerned about.

The Loons played two matches at home inside of four days, a workload typical of the MLS Phase Two schedule. After an emphatic defeat in Houston, Minnesota drilled in four goals in front of an empty Wonderwall on September 6, against an out-of-sync Real Salt Lake squad. Head coach Adrian Heath fielded a Starting XI that fans had long dreamed of, with new DP “Bebelo” Reynoso as the 10 behind Mason Toye, flanked by Kevin Molino on the left and Robin Lod on the right, in place of injured Ethan Finlay.

With a 0-0 scoreline at halftime and an early substitution (after Ozzie Alonso went down injured in the 18th minute), there was a sense of unease among the fans, who followed the action from home. But then came the rally. Leftback Chase Gasper opened the scoring in the 53′, followed by Lod in the 62′. Just 12 minutes after replacing Toye, Jacori Hayes added the third in the 75′. Lod added a fourth for good measure, just as added time was announced. Four different players assisted on the four goals, including Molino (Gasper) and Reynoso (Lod).

It was a true team effort, supported by an accuracy and focus in midfield that Minnesota displayed in 2019, but had struggled to display yet this season. Heath looked to repeat that when they hosted FC Dallas on Wednesday, September 9, and fielded the same lineup. The momentum carried over. This time Toye and Molino starred, the striker notching his first goal of 2020 and the utility midfielder showing why Heath refuses to take him out of the rotation.

With a 2-0 lead before the 30 minute mark, Minnesota had to hold off a sharp offensive structure from Dallas. Ricardo Pepi halved the Loon’s lead in the 42′ and the sides continued to trade shots and fouls. Molino notched his second by converting a 70′ penalty putting Minnesota up 3-1. Play got a little chippy after Santiago Mosquera made it 3-2. Rightback Romain Metanire, the only Loon without a shot that night (though he did make a secondary assist to Molino), drew a red card in the 82′ for an unfortunate late, studs up tackle. The Loons gutted it out without him, seeing out the final 10 minutes of play without conceding or losing composure.

These performances proved that Minnesota has all the components to construct a successful midfield. With players placed where they are most comfortable (Lod on the right, Molino and Toye free to roam and interlap while Bebelo creates space, defensive mids able to make counter runs with their wingbacks without fully abandoning their keeper) the ten field players are actually a cohesive and capable unit.

Unfortunately, that cohesion is fragile and its capability is incredibly dependent on each man doing precisely the right thing.

Forward Mason Toye has played 444 minutes this season. In that time he has scored one goal, his seventh in his three year career. Fellow striker Luis Amarilla has two this season. By contrast, Kevin Molino has made five this season, Robin Lod four. Finlay and Ike Opara have each added two. Toye’s goal against FC Dallas was a perfect illustration of midfield play gone right.

Reynoso and Lod start the counterattacking run. With Reynoso drawing the attention of three defenders, Toye is able to find space behind them, but stays onside as Reynoso drops the ball to Lod. The winger spots Toye’s window, sends the ball through four attackers to Toye on the far post and the striker adds the clinical finish.

This midfield obviously knows how to create goals. So why can’t they provide more of this service to Toye or Amarilla?

Signing MLS veteran Kei Kamara was an acknowledgment of the problem. Kamara is known for exploiting space, creating opportunities from anywhere on the pitch, and poaching goals.

While there was some concern from the fanbase that the acquisition was a sign that Toye was bound for the trade block, it is far more likely that Kamara is expected to help the young striker hone his MLS game. On Wednesday, September 23, just a couple of days after joining the club, Kamara featured in the Starting XI against Columbus Crew. No one could be blamed for expecting that the journeyman would bring instant goals. After all, a depleted Columbus midfield could be easy pickings for him. However, his inclusion only highlighted the problem.

On the broadcast, Kamara could be heard yelling at the midfield, rallying counterattacks when the Loons were bogged down in their own half. When he found runs, he was hard pressed to find much support, with Robin Lod, Thomas Chacon, and even Reynoso, holding back to support the defense after giving up a series of turnovers. They did find the target striker a few times, but at times when the entire squad was thrown forward looking for a lifeline goal.

While this seems like a defensive issue due to the absence of reigning Defender of the Year Ike Opara and frequent injuries to Ozzie Alonso, the problem is not new. Christian Ramirez served time on Striker Island in 2017, as did Darwin Quintero and Angelo Rodriguez in the following years. Allianz Field saw a flurry of goals in 2019, many of which began in midfield with a series of short passes that allowed players to get forward and get behind the opposing defense, much like Toye’s goal against Dallas. But since Phase Two began, it’s been different.

Rather than creating space, the midfield has become dependent on blind crosses and long shots from the center third. Booting the ball, a la Bangers Only, may have sealed the Loons’ berth in the 2019 postseason and padded the RSL shutout earlier this month, but it is not an effective game plan.

Head coach Adrian Heath told the media that he hopes to utilize crosses to Kei Kamara to put United’s goal count. When supporters hear the word “crosses,” they instantly flash to those long Hail Mary-esque balls from Molino and Romain Metanire (filed under “2019 Moments to Forget”), but with Kamara in the equation, Heath’s comment is more likely to refer to those midfield bright spots.

Short passes drawing defenders, opening space in front of goal, a cross to the far post…

The formula is there

The rest of MLS has had ample opportunity to study exactly how Minnesota approaches the goal. They’ve seen how Chase Gasper jukes to find a midfielder. They know that Lod and Reynoso are happy to overlap and swap angles. They know that Toye, and now Kamara, will be left to press forward alone to wait for service that may never come. Salt Lake allowed this to happen once (well, four times), but they won’t make that mistake again, will they?

When Minnesota’s midfield returns to the basics, they cannot be stopped. Kamara and Toye are only as good as the service the midfield provides. The formula is there, but so far can only be unlocked by one combination.

Minnesota United needs to find the others soon.