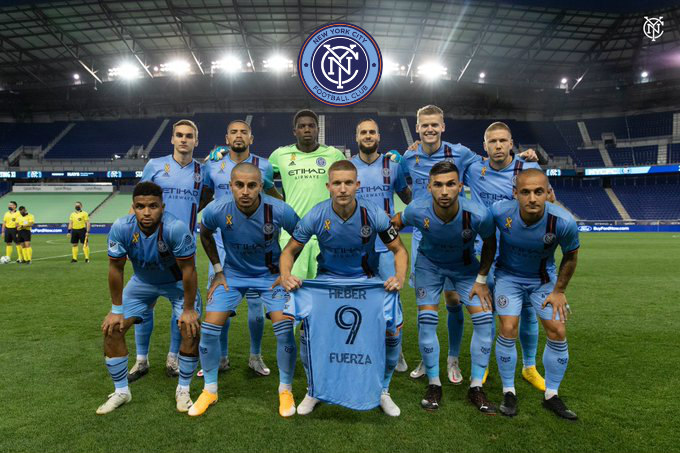 Casual fans tuning into the match on Saturday night would not have been able to tell that New York City FC have been struggling to score goals this season. In an incredible turnaround of a performance, City chalked up four goals against FC Cincinnati. The victory came one year and one day after NYCFC’s outstanding 4-1 performance against Atlanta United at Yankee Stadium in 2019, the last time NYC scored four goals in league action.

New York City’s positive turnaround helps mask the pain of losing Heber for the remainder of the season due to a injured ACL. Almost as if Coach Ronny Deila had finally heard the woes of supporters, he fielded quite possibly the strongest starting XI that the team has left. His decision paid off. NYCFC had much better possession and control of the ball. Passing was crisp. Crosses found their targets. What really stood out was that the forwards took their shots instead of fumbling the ball. Confidence in the team was much more apparent.

Midfielder James Sands played particularly well. With a lovely ball that switched the pitch (name drop intended), Sands passed to Ismael Tajouri-Shradi who assisted Tinnerholm in getting NYCFC’s second goal in the 25th minute. Shortly after, in a grim moment, captain Alexander Ring was subbed off after having a small brush with a FC Cincinnati player. Minutes before the first half was finished, Sands assisted Mitrita earn a third goal for the team. Sands recorded his first MLS assist with that play.

FC Cincinnati came out stronger in the second half. One defensive substitution (Mathieu Deplagne for Tom Pettersson) gave Cincy more possession of the ball, but they lacked the confidence in the final third to finish any plays (sound familiar NYCFC family?). Unfortunately for FCC, NYCFC goalkeeper Sean Johnson, too, had a top performance and was able to maintain a clean sheet.

A flurry of yellow cards to NYCFC and FCC players alike made for an interesting second half. Alexander Callens will miss New York City’s next game against Inter Miami due to yellow card accumulation. With the match clock waning into the night, a strong tackle just outside the keeper’s box led to Medina taking a free kick in the 88th minute. By sheer luck, his shot deflected off the feet of the defensive wall and the ball danced into the net one last time for the Boys in Blue. Hopefully, the result can bolster City’s spirits and motivate them into playing more of the beautiful game that New York City supporters know they can play.