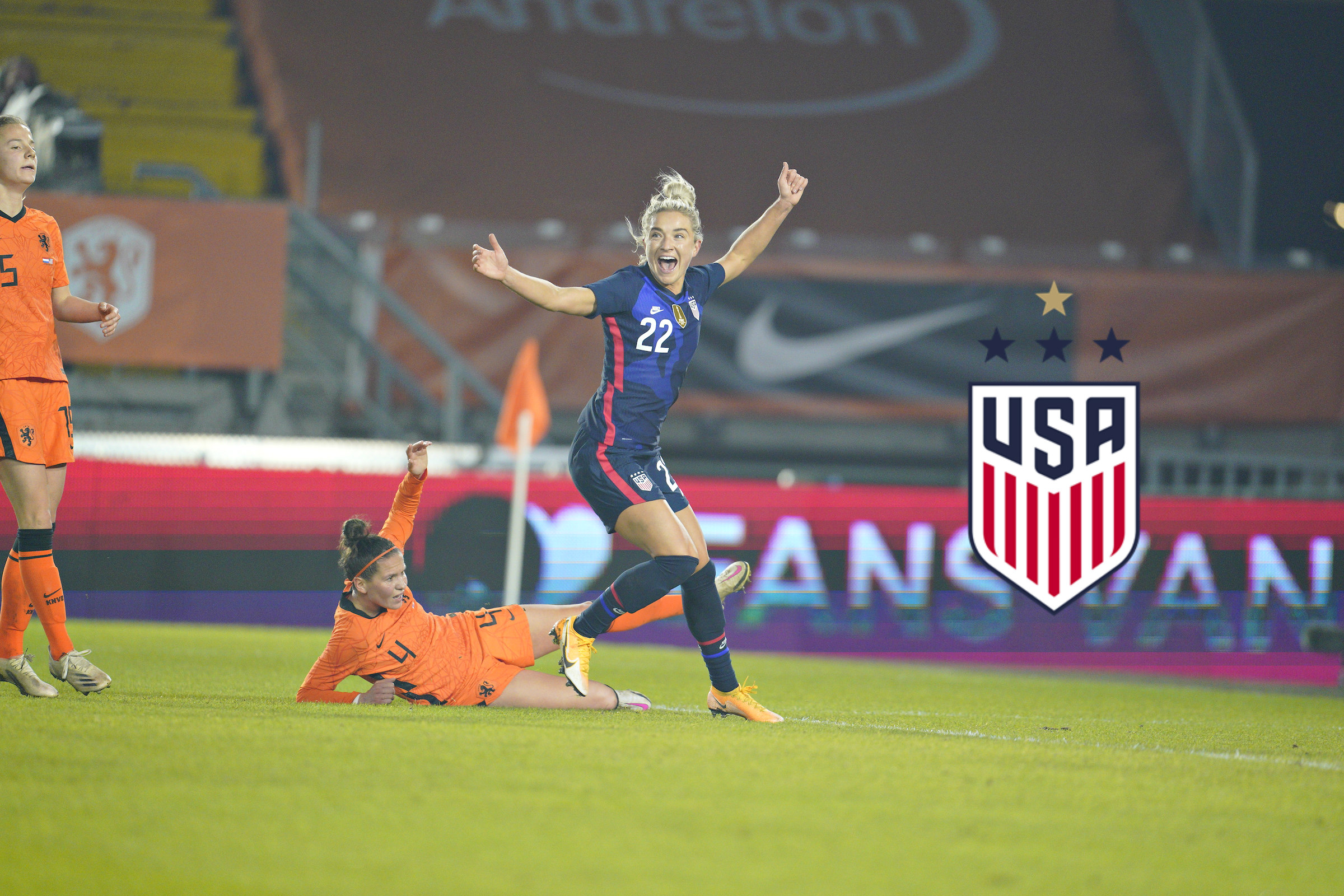 It has been a long time since the reigning world champions have hit the pitch. With only eight games under their belt in this calendar year, the US Women’s National Team returned on Friday afternoon to face the fourth ranked team in the world, the Netherlands, who they beat in the 2019 Women’s World Cup final one year ago. This was a much anticipated game, as it was the first time the entire group had come together (including the overseas internationals) since the 2020 She Believes Cup in March.

Star midfielder Lindsey Horan did not join this group due to a positive COVID-19 test prior to her departure for camp, but the lineup did see the return of Rose Lavelle, Christen Press, Tobin Heath, and Alex Morgan to American soil. (And Morgan’s long awaited return to the WNT’s 18.)

It took the United States a few more minutes than normal to get into their usual high press, high tempo style of play, however they were always the better side. Most of the game was played in the Dutch defending half. The USWNT had great buildup, as usual, but it was apparent that the clinical style of finishing was lacking. That comes with the team being apart for multiple months, as we saw from the USMNT in their recent matches.

Rose Lavelle pulled through in the 41st minute with a banger. The play was set up by Lynn Williams, who passed to Lavelle to set up a shot from the wide corner of the 18. Her shot ended up in the upper V, beyond the grasp of Sari van Veenendaal. This goal was a delight for many women’s soccer fans who have been following her progress at her new home club, Manchester City. Lavelle is barely getting playing time and, when she is, never at her natural position. Hopefully, this excellent showcase of her talent at her natural position will inspire her new coach, Gareth Taylor.

At halftime, Alex Morgan came on, the first time she has been on the field for the USWNT since the arrival of her daughter, Charlie Carrasco, born in May. Morgan hadn’t seen national team minutes since the 2019 Cup final.

Another big appearance is that of Kristie Mewis. The eldest Mewis sister got her first cap in 6 years. She had an amazing NWSL season this summer, coming off of her devastating 2018 ACL tear. The Challenge Cup champion joined her younger sister Samantha Mewis in the midfield. It did not take long for her to make an impact. In the 70th minute, Mewis scored after receiving a pass from Williams right behind the defender. This was her second goal of her international career, and a special moment for all USWNT fans.

The United States held on to victory, by the same margin as in 2019. Captain Becky Sauerbrunn secured the defensive line, and held the Netherlands to only two shots, with zero on goal.

A special shoutout to Sophia Smith and Jaelin Howell on their first international caps. They are the first players born after the pivotal 1999 Women’s World Cup . It is always amazing to see the growth of soccer in this country, and a sneak peak of the next generation!

While the USMNT is considering another camp (with mostly domestic players) in December, this was the last we will see of the USWNT in 2020, and they go out undefeated (8-0-0) in this unprecedented year.

SheBelieves Cup Kicks Off in Orlando

Aug 26, 2020 Switch The Pitch
Processing…
Success! You're on the list.
Whoops! There was an error and we couldn't process your subscription. Please reload the page and try again.