Columbus Fans Savor the Crew – And the 2020 MLS Cup 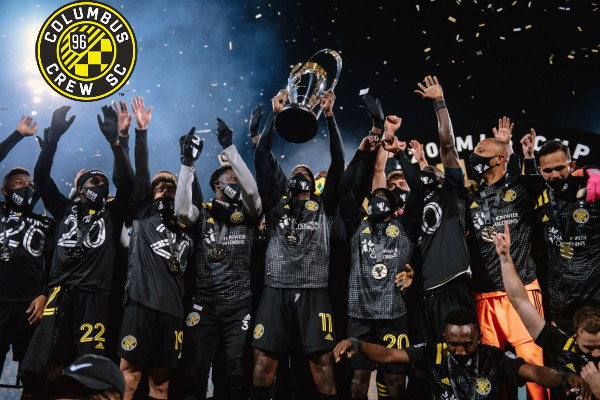 It was fitting that the final big game of this season was at MAPFRE Stadium as this was the final full season to be played at the league’s first soccer specific stadium. However, it was in no way a normal season with a pandemic, the Florida bubble, and COVID tests dominating the headlines. And three years ago, it didn’t even seem like there would be an MLS game in Columbus ever again as the team was supposed to relocate. But Columbus Crew SC put an exclamation point on a journey three years in the making with a 3-0 victory over the Seattle Sounders.

Many of the Crew faithful, including myself, were gut punched a few days before the MLS Cup when it was announced that winger Pedro Santos and midfielder Darlington Nagbe would be missing the MLS Cup due to COVID-19. After some Eeyore moments on Twitter, the Crew fan base returned to what they do best—supporting their team.

Caleb Porter had Luis Diaz and Aidan Morris, both young players, fill in for Santos and Nagbe while the rest of the lineup was made of the starters the fans are used to seeing.

Columbus dominated a majority of the game with Seattle not having too many dangerous moments. Columbus opened their scoring in the 25’ when Harrison Afful sent a ball across the field to Columbus’ Lucas Zelarayan. Zelarayan hit the ball hard and low at Stefan Frei who seemed to get a touch on the ball as it entered the net.

Zelarayan wasn’t done with his night. Harrison Afful sent in a ball that was deflected by a Seattle defender right to Zelarayan who, instead of shooting the ball at the top of the box, passed the ball to a wide open Derrick Etienne who sent a ball in the net at the far post. This led us into halftime with a Crew lead of 2-0 – the most dangerous lead in soccer.

However, the danger didn’t seem to weigh on the Crew players’ shoulders. While Seattle seemed to possess the ball even more in the second half, there weren’t too many times that the Crew had to worry.

Then, they put the cherry on top in the 81’ when Luis Diaz sent a ball to Zelarayan at the top of the 18 who placed it in the top corner of the goal to make it 3-0.

Caleb Porter made some sentimental substitutions when he put in Hector Jimenez in the 83’ and Waylon Francis in the 90’, two of the three current Crew players who were involved in the 2015 MLS Cup loss against Porter’s Portland Timbers. (The other member of the 2015 Columbus Crew that is also on this 2020 Crew team was backup keeper Matt Lampson.)

As the final whistle blew, the team celebrated, and Caleb walked the perimeter of the field cheering with the few fans that were permitted to attend the game.

While the MVP was Lucas Zelarayan, and deservedly so, there was not one player that did not leave it all out on the field on Saturday night. Special mentions go to Aidan Morris who stepped in for one of the strongest midfielders in the game, Nagbe, and handled the pressure with the confidence and skill of a veteran player. Also, Jonathan Mensah, the Crew captain, needs a shout out for being the leader the Crew needed him to be and who was a defensive wall throughout the season.

It was a thrilling and emotional game for the team and fans alike. While all the fans can’t be together right now, we can hold on to this moment to get us through the times ahead until we can all get together to celebrate this team who overcame so much in the past few years to bring another MLS Cup home to Columbus.