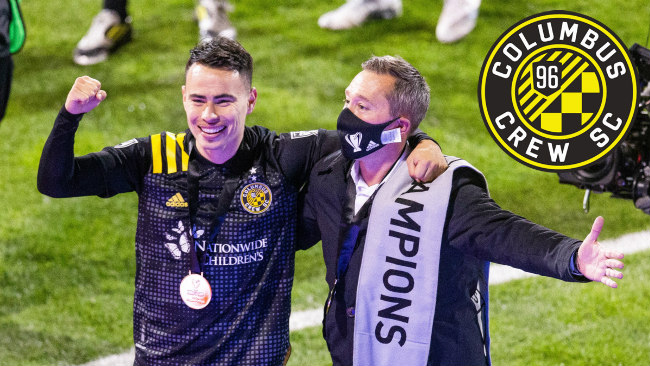 The lucky few of Columbus Crew supporters that were able to attend the game were treated to a very special evening. If you haven’t been privy to happenings in MLS over the last few years, buckle up.

This story begins on June 15, 1994, when Columbus Crew was announced as one of the ten inaugural teams for Major League Soccer. Mapfre Stadium (originally Crew Stadium until 2015) was the first soccer-specific stadium in the United States. Many magical moments in United States soccer have occurred in Mapfre stadium, both for the local and national teams.

Columbus Crew SC won their first championship in 2008. The Men’s National Team has kept Mapfre stadium a fortress, only losing one game to Mexico 2-1 in 2016. Otherwise, they’ve outscored their opponents 19-1 at the ground. Several matches of the 2003 Women’s World Cup were held there, as well.

In late 2017, owner Anthony Precourt announced that he would be moving Columbus Crew SC to Austin, Texas, a presumably stronger market for soccer supporters. Backlash from the community was immediate and harsh. A whole movement titled Save the Crew formed. Protests and open letters flooded MLS culture. A year later, a judge denied the request of Columbus Crew SC ownership and MLS to dismiss a lawsuit by the city of Columbus that sought to keep the team. Plans were released to revamp Mapfre Stadium into a large sports park. A new soccer stadium plan for downtown Columbus was revealed and Precourt relinquished his grip on Columbus to turn his focus to Austin FC. Save the Crew turned into Saved the Crew!

Under new ownership, the Crew also gained a new head coach in 2019 — Caleb Porter. Just a few years prior, the Portland Timbers, led by Porter, took the 2015 MLS Cup from the Crew’s grasp in the final held in Mapfre Stadium. The Crew struggled through the transition year with Porter and failed to qualify for the playoffs in 2019.

The story painted in the 2020 MLS Cup final was much different. Seattle was fresh off of a victory against Minnesota United, scoring three goals in fifteen minutes to come back from a 0-2 deficit and win in stoppage time. Seattle had won two MLS Cups in five years and they were hungry to win their third. The Sounders were favored to easily win against the Crew. They were used to playoff pressure.

Two of the Crew’s prime starters, Darlington Nagbe and Pedro Santos, were both ruled out of the game after testing positive for COVID-19. Despite all the setbacks, the Crew showed up with a game plan. In the opening minutes, Columbus dominated possession and fired shot after shot toward Seattle’s goalkeeper, Stefan Frei. Frei’s strong performance was shattered after he fumbled a shot by the Crew’s Argentinian Designated Player, Lucas Zelarayan, in the 25th minute.

Zelarayan continued on with what became a remarkable performance for the evening, providing the team with another goal, as well as an assist. Columbus completely shut out Seattle’s attack with a press that the visitors had no response to. Despite making four substitutions by the 60th minute and controlling possession nearly 65% of the game, Seattle was unable to turn the tide in their favor, only having two shots on target at fulltime. The game ended 3-0 to see Columbus Crew lift the Cup.

2020 has been a year full of adversity for most teams. Constant COVID-19 testing and being separated from family members led to burnt-out players, staff, and coaches. As Porter spoke in the postgame press conference, he grew emotional reflecting on his journey to this moment.

“This is a pretty special date, 12/12, and it’s a very special stadium. Sixteen years ago, 2004, as an assistant coach at IU, I won on this pitch on December 12th, ironically, in my mentor Jerry Yeagley’s last year. … Ten years ago, 2010, on 12/12, won a National Championship at Akron. You know, a city that no one talks about a lot up the street; a city that I was proud of, Akron, we won a National Championship. And then obviously five years ago, we won a championship, not on 12/12, on 12/6, but on this field.”

Porter also spoke about what his players, brought to the field, enthralled by their performance. “You know, we did what we needed to. We fought. And we’re talking guys like Luis Diaz who, when I got him, I don’t even think he knew how to defend at all. And he was tracking back and digging in and grinding and Gyasi [Zardes] is battling for balls in the air and Jona Mensah, what a beast, he is — heading the ball out. … Unbelievable.”

Porter was especially impressed with Zelarayan, a player he brought up from Liga MX club Tigres in the 2019-20 offseason. And, according to the coach, the feeling was mutual.

“We shared a great moment after the game. He said something that I’ll never forget. He told me I changed his life,” Porter told the media. “And I told him he changed my life. I brought him here to win championships. I brought him here.”

That plan worked. Zelarayan was involved in every one of the Crew’s postseason goals, including these three. For this, he was named MLS Cup MVP. In Porter’s eyes, there’s more to it than the hardware though.

“He seemed to be looking for something new to stimulate him, reinvigorate him. These guys are people. Yeah, they make money. Yeah, they have to perform. They are people. A lot of time I’ve seen this with guys, they are cutthroat, they sell their souls a little bit and they lose their way. You know, he came here and I think he looks like a new man. But he’s an unbelievably special player. I mean, unbelievable.”

To close out Mapfre Stadium with such a championship performance makes the last few years worth it. Columbus looks to play a few more games in Mapfre Stadium before moving to their new home in or around June of 2021. Congratulations on a well-earned title.