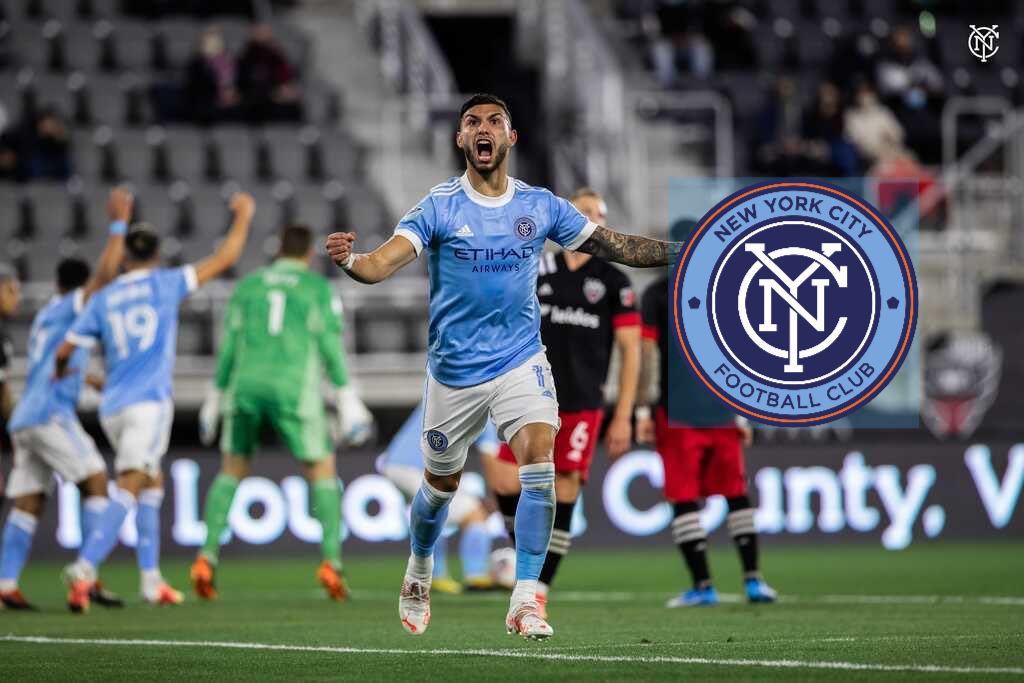 Ah yes, MLS is Back and supporters are in the stadiums. We’ve been waiting over a year for this moment. Opening Weekend of MLS did not disappoint. Absolute bangers in almost every game. What a time to be alive!

The story was no different in the nation’s capitol. DC United and NYCFC faced off against each other in a thrilling Eastern Conference match. Coach Ronny Deila gave NYCFC supporters a strong Starting XI with all our favorite familiar faces. NYCFC started hot from the first whistle, giving supporters some of the most fast-paced, and cleanest soccer that the team had ever seen in the first fifteen minutes of the season. Passes were crisp, rapid, and had intent. Possession was dominant and you could see that NYCFC was determined to score an early goal.

Valentin “Taty” Castellanos shot inches wide of the goal within the first two minutes of the game. Ismael Tajouri-Shradi hit the crossbar off a freekick in the 13th minute. In the 15th minute, midfielder Jesus Medina completed a snazzy backheel flick to Maxi Moralez who saw Anton Tinnerholm rushing down the flanks. Accepting a quick pass across the box from Tinnerholm, Taty found himself in the right place at the right time to awkwardly direct the ball into the net for NYCFC’s first goal of the season. Oh, if only that was the story for the remainder of this game.

Instead, DC United responded absolutely brilliantly (heh) to NYCFC’s tactics. Almost as if on a timer, near the 20th minute mark, DCU players began pressing NYCFC players at every moment. If NYCFC had the ball, you could bet there would be a black and red jersey pressing within a few seconds. NYCFC fell apart. Passes were no longer intentional, but more of a panicked response. City couldn’t move the ball much further than the midfield without losing possession or passing back to restart. DC kept pushing and started taking shot after shot. The newcomer for DCU, Brendan Hines-Ike, gave DC supporters a show. Commentators marveled at how determined he was to get a goal on opening night. In the 39th minute, Hines-Ike sent a scorcher past Sean Johnson and into the back of the net. A mere five minutes later, Russell Canouse scored off a corner kick to put DC United ahead 2-1 at the end of the first half.

The second half began with no changes for either team. It was much quieter on both sides with less frantic passing and more pauses between completed passes as players assessed where to move the play. NYCFC still looked discombobulated and the substitutions near the 70th minute were a welcome relief. Deila’s substitutions were sound with new players making their debut. Malte Amundsen replaced Gudi Thorarinsson, Alfredo Morales (boldly dawning the #7 for the first time since the departure of David Villa) relieved Alexander Callens and fresh Homegrown Andres Jasson saw out Ismael Tajouri-Shradi. It was comforting to see ITS play as long as he did given that his past season was riddled with injuries and working on getting back to match fitness.

The changes on the field led to a refreshed NYCFC combatting to level the score. Again, they saw cleaner passes with more intent and supporters finally started to see NYCFC take shots again. Despite the renewed fight in the team, it was not enough to tear down the defenses of DC United. DC United finished the game strong and held on to the 2-1 result.

NYCFC now turn to focus on the home opener at Yankee Stadium against FC Cincinnati at 1:00PM EST on Saturday, April 24. It will be the first game played at Yankee Stadium since the 4-1 win against Atlanta in September 2019. NYCFC Supporters will be expecting true grit and passion on the field as they look to turn Yankee Stadium into a fortress.