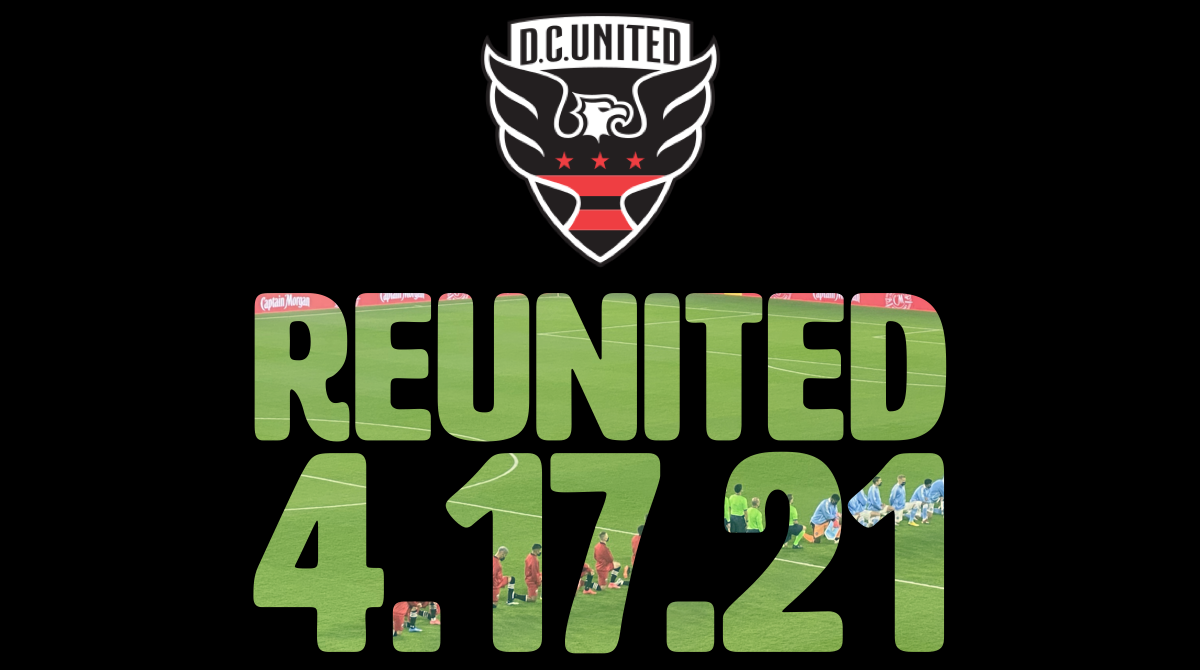 It’s been over a year since we’ve all gathered together at Audi Field, and many of the Black-and-Red family are still absent due to COVID-19 protocols in the District restricting gatherings in stadiums to 25% capacity. Despite our physical distance, the hearts of the Black-and-Red family were certainly with D.C. United at Audi Field on Saturday night.

4,500 supporters turned out, the swell of drums and raised voices emanating from the supporters’ section and all corners of the stadium increased with each subsequent D.C. United goal. While fewer in number than usual, supporters were certainly just as persistent and boisterous in their support of the Black-and-Red.

Veteran defender Fred Brillant donned the captain’s armband for D.C. United, answering the speculation over who new head coach Hernán Losada would choose to lead the team. Although soft-spoken off the pitch, Brillant has a steely edge once the whistle blows. Brillant’s depth of experience in MLS will be a boon to Losada as he settles into the league.

To say the first half was rough and tumble would be an understatement. Players from both DC and NYCFC were fouled with regularity. Brillant was booked with a yellow in the 9’, and it’s hard to believe no further cards were displayed during the choppy first half.

NYCFC’s Valentin Castellanos opened the scoring, tipping the ball around defender Brendan Hines-Ike in the 15’. D.C. would continue to press NYCFC, seeking a scoring opportunity that wouldn’t materialize until the 39’.

New signing Brendan Hines-Ike scored, his first MLS goal, firing a rocket past NYCFC goalkeeper Sean Johnson to bring the match level. Hines-Ike dedicated the goal to his wife and little one on the way. Just minutes later, Russel Canouse capitalized on a corner kick from Julian Gressel, tapping the ball through heavy traffic with his first touch to score in the 44’.

The second half proceeded to be just as choppy and roughshod as the first, with cards shown all around. It’s a small wonder that Referee Ted Unkel bothered to pocket his cards at all. While both teams were bent on seeking out an additional goal, neither managed to find the back of the net. Of note in the second half, fan favorite Andy Najar made his first appearance back in Black-and-Red, entering the fray in the 88’ to pleased cheers from the small home crowd.

The tenacious and aggressive play from the Black-and-Red is a breath of fresh air, and while D.C. didn’t open the scoring, they were certainly creating chances from the first whistle. Coach Losada’s influence on the team’s playing style is evident even in this first match of the season, with an emphasis on verticality and pressing the opposition.

When asked what he feels the team needs to build on to continue their success this season, Losada set high expectations,

“We need more automatics on defense. We need to sometimes be more calm on the ball, to give more options to the guy on the ball, to react quicker when we lose the ball, to keep the team compact and recognize the moments to put pressure and when to fall back in a block, to then use those pressing triggers we have been practicing to recover the ball every time it crosses… maybe even more in the box, to create more danger…There are so many things, it’s so crazy beautiful and there is always something to improve.”

A jubilant Losada stressed how important it was for the team to play in front of their supporters. He said, “I’m very proud and extremely happy with this first victory and at home. At home with our fans. I really appreciate the support of the fans and if there is someone who really deserves this victory it’s the fans.”

D.C. United has been redefined and now reunited with the Black-and-Red family, at home. We can’t wait to see how this team continues to take shape as the season progresses.

Next up: D.C. United face off with the New England Revolution at 8 pm on Saturday, April 24th at Gillette Stadium.