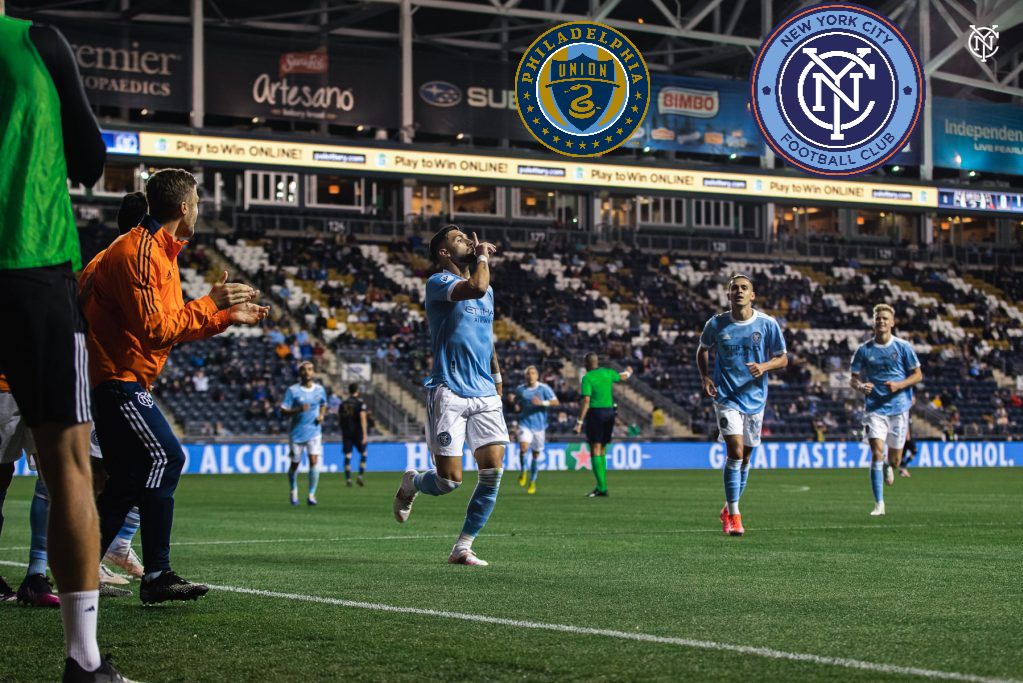 New York City FC traveled to Chester, PA, for the third week of the MLS season to face the reigning Supporter’s Shield Champions, Philadelphia Union, at Subaru Park. Coming off a 5-0 win against FC Cincinnati last week at Yankee Stadium, the Boys-in-Blue looked to add three road points to their season total. An injury to key defender Maxine Chanot was an early hit to NYCFC’s odds. Chanot was pulled from warmups after what the club referred to simply as an “adductor injury.” Sebastian Ibeagha took to the pitch in his place. With some other minor changes to the lineup, coach Ronny Deila sent out another 3-4-2-1 formation.

Leading up to the game were several rumors regarding star striker Valentin “Taty” Castellanos and a possible departure for Palmeiras of the Brasileiro Série A. Some posited that Taty would refuse to play for NYCFC so that he would be released and others suggested that a deal had already been made and Taty would leave soon. During a media zoom call earlier this week, NYCFC Network analyst , Glenn Crooks, put the rumors to rest by confirming with coach Deila that Taty would be staying with NYCFC. Deila said, “He needs to stay here and achieve something with us.” NYCFC supporters are taking those words with a grain of salt, given past experience with coach Patrick Vieira, who in 2020 denied that he was leaving for OGC Nice, then departed mere days later.

Philadelphia Union decided to rest several key players ahead of the second leg of their Concacaf Champions League matchup against Atlanta on Tuesday. Matt Real, Anthony Fontana, and Cory Burke, made their first starts of the season replacing Kai Wagner, Leon Flach, and Kacper Przybylko, respectively.

It didn’t take long for NYCFC to take advantage of the shuffled lineup. In the 5th minute, Maximiliano Moralez bodied his defender in the midfield to pass the ball to a rushing Jesús Medina. Rather than making the obvious pass to Taty on his left, Medina shifted the ball to his right to meet Anton Tinnerholm screeching down the right wing. Tinnerholm crossed it back into the box for Medina to blast into the back of the net with ease.

With the wind already knocked out of Philly’s sails, another blow came to the team’s morale when Jose Martinez tried to discreetly knock Taty in the face with his elbow during contact. After a quick video review, the referee pulled a red card from his pocket and sent Martinez off in the 16th minute. Down a goal and down a man, Philly quickly adjusted their formation to fill the void left by Martinez. NYCFC dominated possession for the remainder of the first half, taking several shots that went off target, and a few that were on target but saved by Andre Blake.

In the second half, the Union found themselves continuing to defend against a barrage of shots from NYCFC. However, New York City FC found it difficult to score a goal against the 10-man Union. Most passes into the box were picked off by a defender or shots were not on target. That changed in the 65th minute, when Castellanos sighted a ball knocked high into the space above the box that was not properly cleared. Taking advantage of the split second after the ball was chested down, Taty skated behind goalkeeper Andre Blake and cheekily knocked the ball into the net with a rabona. In an even cheekier celebration, Taty raised his hand to his ear and shushed the Philly supporters in front of him. “Taty was shushing the Palmeiras supporters,” Dave of the Third Rail Bronx excitedly expressed. Only time will tell.

The last twenty-five minutes of the game saw NYCFC continue to control possession with a few moments where Philly challenged the defense. Ultimately, the game ended 2-0 with New York City FC having 66.9% of possession. On paper, NYCFC should have scored more goals. With a whopping 23 shots taken, only two actually hitting the back of the net is saddening. However, a win is three points that New York City FC is happy to take back home.

New York City FC will play Orlando City SC at Exploria Stadium in Florida next weekend on Saturday, May 8th, 2021 at 6:00PM EST.