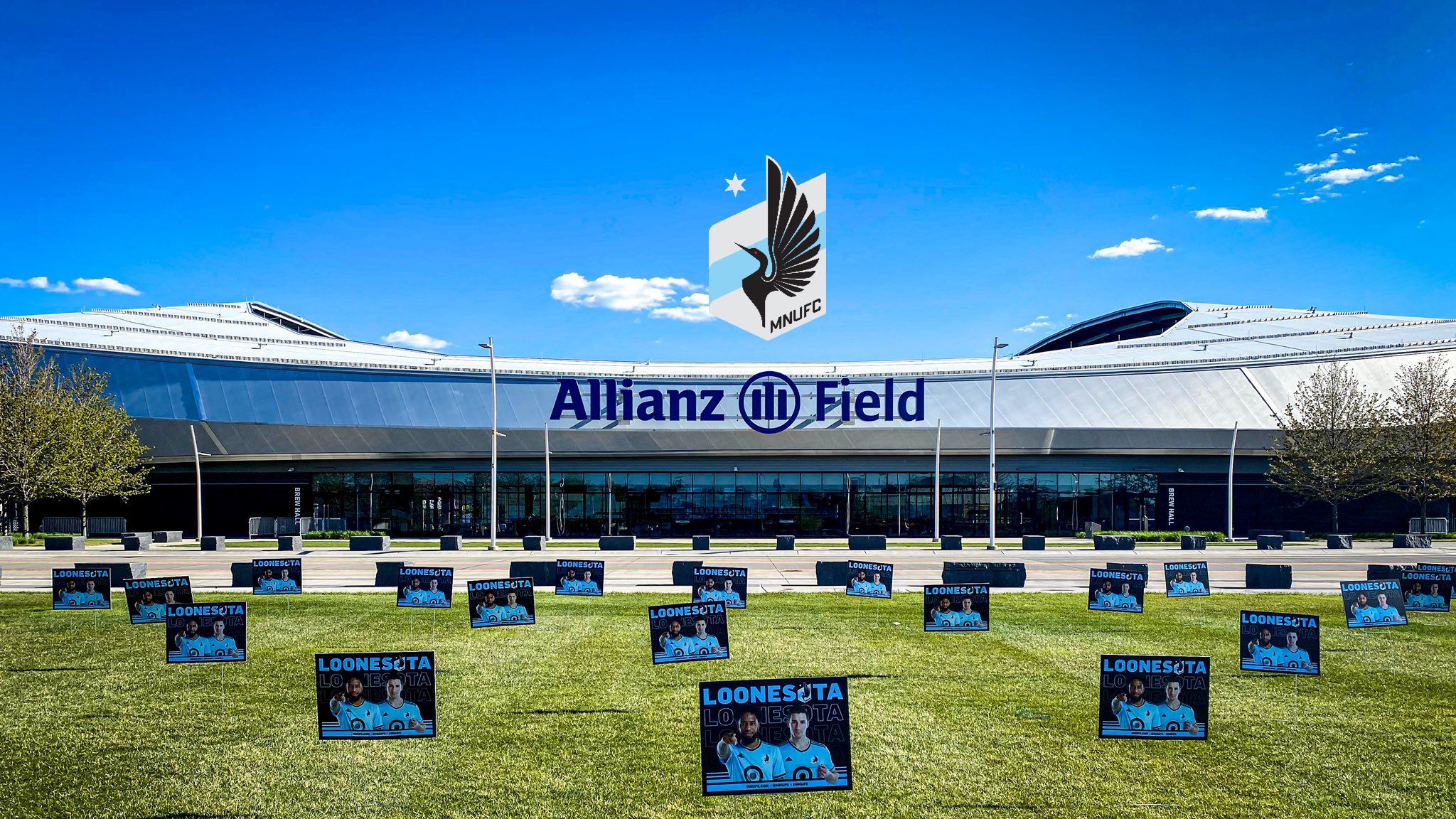 What do you say about the team that has everything it needs — one of the most exciting play makers in the league; a pile of strikers full of promise; a deep, albeit lopsided, midfield; some of the best defenders in the league; and a few draft classes that have proven themselves from first touch? Everything but a clear plan to use what it has?

Minnesota United Football Club’s fifth MLS season is off to a horrendous, record breaking start, despite the franchise positioning itself for a star studded, trophy contending, post-pandemic year. With 4 straight losses (half of them at home, in front of 4,100 fans), 0 points, and a minus 7 goal differential (2nd worst in the league, ahead of only Cincinnati with minus 8), the memory of 2017’s “Snowpener” becomes that much happier. Carefree. Wistful, even. Because fans were told there was a plan.

Last Monday I ventured out of my office over lunch with no plan other than to simply get out of the office, maybe find coffee, grab a couple things for the week. I cranked my windows down and my music up. Turn left and Target is 30 seconds away, 3 minutes if you get the red lights. I got the red lights. I was in the left lane, with a few car lengths of space between my front bumper and the car in front of me so when we got the green I eased of the brakes and slowly rolled forward to distance myself from a tailgater. Then I stopped. The old Chevy in front of me wasn’t moving. Then it started rolling. Backward. I had 30 feet and closing ahead of me, no clearance behind and a decision to make.

Minnesota had so much to look forward to on May 1. A home crowd (25 percent capacity), a new club visiting on a successful streak, an unseasonably warm afternoon, and new players waiting in the wings… They said maybe. Adrian Heath rolled out his usual 4-2-3-1, but with Ozzie Alonso starting in place of Ján Greguš, to Wil Trapp’s left (a dual No. 6 pairing), Hassani Dotson on the left wing in place of the injured Robin Lod, and Ramón Ábila up top making his first start. They pressed high and they pressed fast. And it took Austin a whole 17 minutes to find and exploit the gaping hole in the Loons’ third.

Option 1: Throw it into reverse and see if the tailgater would recognize the problem. I had no doubt he saw the problem, seated as he was in his SUV, with plenty of height over me, but I did doubt he would see my own lights. He crept closer, presumably thinking I’d accelerate any second. I leaned out my window to catch a glimpse behind him — The tailgater was tailgated. Our lane was a solid line of cars. I would not be moving backward any time soon.

Midfielder Diego Fagúndez scored a beautiful goal, bringing his season tally to 2, from just 4 shots. One would think that a high press would result in a lot of shots, especially for a club which seems to be specializing in shots this season, but Minnesota had only 13 by the end of the match (the same as Austin, who did not have much of a press), 2 of which were on frame. And, lest we forget, one world famous howler from Reynoso which was very much not on frame. MNUFC had plenty of opportunities to level the score, but all it took to defeat the high press was a couple of defenders crowding around target man, Ábila, who is definitely not a pressing striker.

A 1-0 loss at home. Two straight home games without a song and still no points on the season. Austin was winnable. Maybe Fagundez just got lucky. Colorado was just as winnable, as long as Minnesota cleaned up that hole in the midfield.

As the driver in front of me attempted to restart her car, her lights would flash on and she’d roll backward a couple feet, then stall again. I watched this a few times. Option 2: I still had 20 feet so I could maneuver forward and merge to the right. I angled over enough to get a good look at traffic in that lane. The light behind us had turned red, but any slack in the traffic was quickly taken up by the vehicles behind us, whipping out to catch our light while it was still green. Maybe I could gun it…

The first 45 minutes in Colorado were brilliant. Short, progressive passes through the midfield. Clean movement into the box. Shots on goal. Two shots in goal. The season’s goal tally tripled in that half of the fourth match the Loons played. And a fan base that would have been thankful for any garbage goal was stunned by a Reynoso freekick and a Hassani Dotson tap-in that may as well have been a banger for the cheers it drew back home. Interplay. A 4-3-3 that shocked the well-studied Western Conference system.

That won’t end well. Ten feet. Option 3: I turned my wheel back to the left – so that if the tailgater tried to take Option 2 and hit me, I’d roll toward the median instead of into traffic – and shifted into park. I took off my seat belt and opened my door. Maybe she can’t work the e-brake, maybe it’s a medical emergency…

The second half began and the Loons checked out of the game as the Rapids charged on. Colorado halved MNUFC’s lead, added more attackers, then equalized. And, not two minutes after Heath replaced Reynoso with a defender — broadcasting to all that he’d be happy with a point — the Rapids scored the winning goal.

Five feet and closing, faster now. Nope, stay in the car. She’s looking down, has no idea how far she’s rolling. Option 4: Honk. I sat there, hazards on, tapping the horn in quick bursts to get her to look up, see me in her rearview. Her lights flashed on and off as she slowly rolled, in fits and starts, closer and closer. Then… Thunk.

Head coach Adrian Heath’s Three Year Plan expired with Darwin Quintero. The Fourth Year Redux ended early with Luis Amarilla’s injury, but was extended by the addition of Emanuel Reynoso. Year Five looked hopeful. Two losses, full of poor shots and a stingy, depleted defense, do not define a season. But a third poses questions. And a fourth highlights a problem.

She knew she was rolling backward but claimed she didn’t realize she’d hit me, or that she’d even come close. Also claimed she wasn’t in reverse, that she was on the brake. Sure, maybe a computer short killed her transmission (My own Chevy has done stranger things, but thankfully only in parking lots). She didn’t know what to do, just sat there fiddling with her keys, then her phone, back to her keys. I suggested she call for traffic control and for a tow, waited with her so I could get an incident number in case a problem came up later, even though the impact had just turned a small old ding into a small new crack.

Heath & Co. continue to promise “reinforcements.” Whatever happens, better times and “two or three more players” are ahead. Reinforcements are always coming. Reinforcements are always going. Darwin Quintero, Johan Venegas, Angelo Rodriguez, Thomás Chacón, Luis Amarilla, and Aaron Schoenfeld, among others, were all billed as reinforcements in their time. Reynoso and Ábila are the latest examples of reinforcementswaiting to be joined by reinforcements. And now, as a constantly shifting attack continues to stagnate under a game plan of lob-cross-shoot, Adrien Hunou, still in France waiting for his visa, is expected to shift the goal differential back towards zero. Lucky guy.

While we waited for the sheriff, she worried. I said, Look, it’s warm, it’s not raining, and we’re chilling in a median rather than on a freeway. Plus it’s Monday – It’s all up from here, right?

Following this latest loss, midfielder Ján Greguš said, “To be honest, we are not in the place to look at that [playoffs] right now, we have to win the next game and then win, and win, and win. We have to look in front of ourselves and right now we are not even in position to look for the playoffs with these kinds of performance, like for example the second half.” He added, in response to a question about the three-man midfield, “We didn’t even have a second half, so they took advantage of it and scored other goals, but shouldn’t have.”

I an incident card and left them to figure out the tow. I’m fine, my car is fine. I grabbed lunch and a coffee and my week got better. My only regret was that first traffic light.

When you are at the bottom of the league, you can only go up. But every decision you make risks making the path more difficult. Simply forcing yourself to make a decision puts otherwise avoidable obstacles in your way. The Loons could have played those second halves. Heath could have utilized the two or three players he brought in last time.

What Minnesota United FC does in front of its fans on Wednesday night against Vancouver will decide the trajectory of the season and the identity of the club. Inevitably, no matter the result, more questions will be raised. No one expects Hunou to be the answer. Except, perhaps, Adrian Heath.