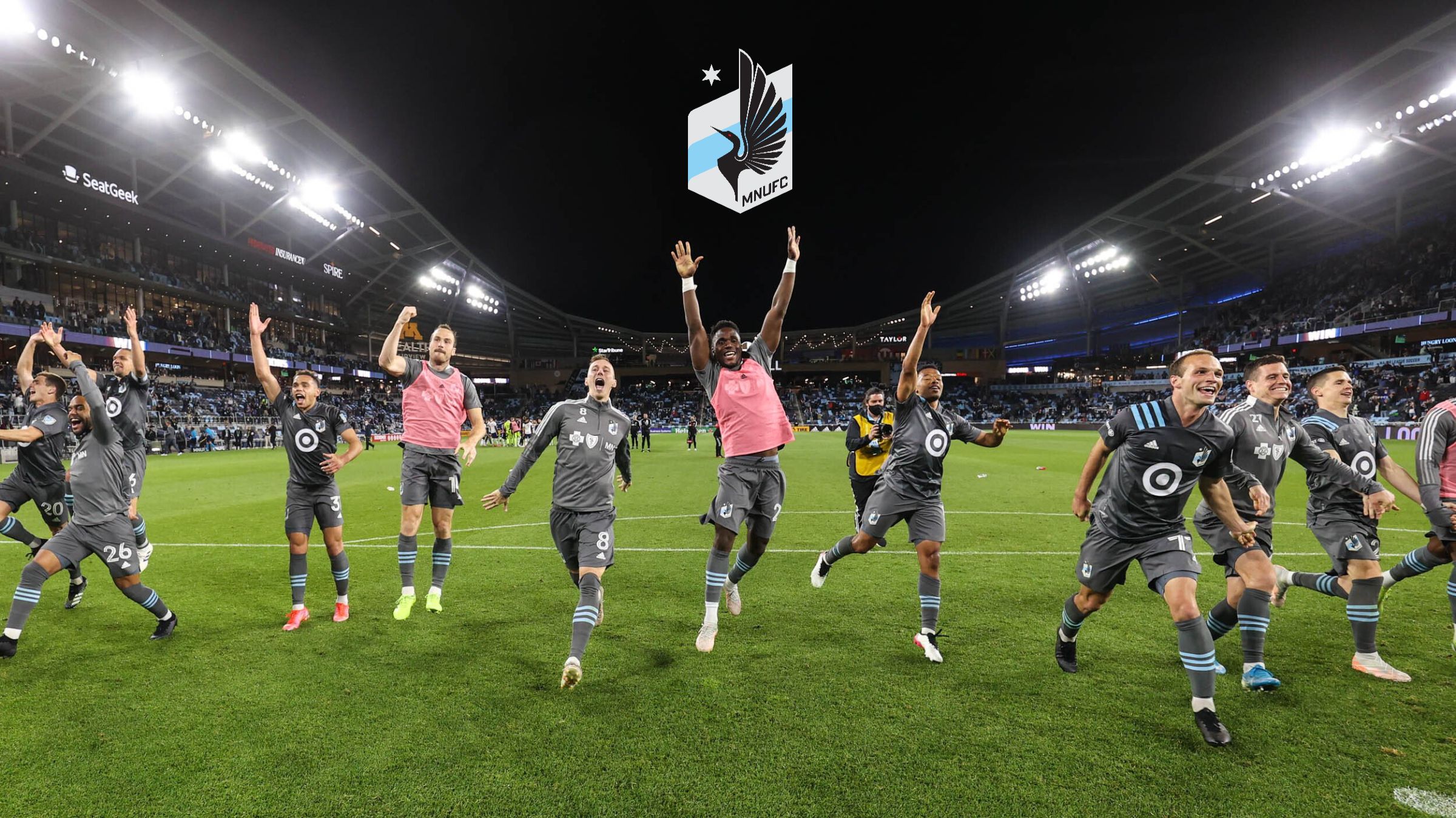 Following a record breaking four game losing streak, Minnesota United FC returned to Allianz Field in Week 5 and secured 6 points in front of the Wonderwall. Both wins came from late goals knocked into the lower left corner. Both showcased the talent and skill which this squad had thus far only shown on paper. And both seemingly validated Adrian Heath’s stubborn streak. With upward momentum and an extended break, what could this sample of ‘ascendency’ mean for the Loons?

In the middle of Mental Health Awareness Month, one year and a day since his brother Gastón took his own life after a fall into depression, Ramón Ábila scored his first goal for Minnesota United, securing the club’s first win of the season. Not only was the result sorely needed by the dejected squad, but it also provided much needed catharsis for a fanbase that felt dispirited by promises made and not kept.

Head coach Adrian Heath made only one change to the Starting XI he had rolled out in Colorado. Goalkeeper Tyler Miller finally got a chance to man the net in front of the home crowd, marking his comeback from two hip surgeries that kept him sidelined after the 2020 restart. He was a vocal presence at the back, directing the 4-3-3 into better defensive positions to prevent the flood of opposing passes into the final third that Dayne St Clair was forced to face in Colorado. Like DSC, Miller made quite a few stops in the first half, keeping the Loons in contention despite their own failure to convert chances at the other end of the pitch. Opportunities abounded, but nothing came to fruition for the home side until a second half change shifted the momentum.

Heath reverted to his favored 4-2-3-1 in the 65th minute, replacing defensive midfielder Jan Gregus with Ábila. The striker immediately showed what he could bring to the attack when allowed to work in space and wait for a ball to come to him. This effect had been neutralized by the high press against Colorado, but with Emanual Reynoso, Robin Lod, and Hassani Dotson, doing the leg work in the central third and on the wings, Ábila became the poacher. Minutes into his shift, the striker toyed with the centerbacks, pushing them into traffic inside the box before dropping back a step to receive a cross. His tap-in was saved by Maxime Crepeau, but the play, and Ábila’s urging, served to rally the squad.

When captain Ozzie Alonso triggered a counterattack, the tides turned. Lod took off with the ball and lofted a cross to the far post. Ábila positioned himself perfectly to drop a glancing header across the goal line. It was a bittersweet moment for the former Boca man, who accepted a yellow card for celebrating the goal by pulling his jersey over his head to display a photo of his late brother.

He explained to the press, “The truth is that I still don’t understand the rules thoroughly, from what’s allowed or not. But the yellow card didn’t interest me, I didn’t give the ref much attention because this is someone that I love so much and miss so much. Truth is, he’s someone who gives me strength to continue day in and day out.”

The final 15 minutes required the Loons to gut it out on defense and Miller’s services were called on again. But Minnesota closed it out. One goal, three points, Wonderwall.

“I think collectively you saw a more determined attitude that this team really needs to encompass in order for us to be successful. That’s who we are, that’s our identity,” reflected Miller.

“We are really difficult to play against and I think tonight you saw that where maybe it was lacking in a few positions and we weren’t able to put it together for the entire 90 minutes for the first four games, but we have to also be realistic. We are still 1-4, we’re still challenging to compete and climb the table. But each game, each opportunity that we have, we have to approach it with the same attitude and I think that this team could be really successful if we can do that.”

How did the fans feel about this shift in the status quo?

Would they be better on Saturday? Not really. Were the problems, sarcasm or otherwise, fixed? Definitely not. Was it a fun watch? In retrospect – Yes.

Hosting FC Dallas for a Mental Health Day match, the Loons returned to the 4-2-3-1, with Brent Kallman and Ethan Finlay in for Raitala and Alonso. To be honest, it was more of a track meet with some professional keep-away mixed in than a soccer game. Displays of brilliant footwork were interrupted by cheap give aways, powerful shots (20 of them) were sent high, wide, or horribly askew, while six others were easily collected or deflected by Dallas goalkeeper Phelipe. The notes in support of mental health which accompanied each matchday tweet by the club were met with remarks about the effects of the performance on the supporters’ collective psyche. But it took just one shot, from a desperate but gritty setpiece opportunity, to cue up Oasis and drastically change the narrative… A mere 94 minutes into the match.

At the 64 minute mark, there were hopes of a repeat of Wednesday’s glory as Ábila replaced Finlay and sought out poaching positions. But despite all the crosses sent in, it was not to be. Minnesota was incredibly fortunate – especially as the night wore on with no substitutions for sprint-wearied legs – that Dallas had the same problem. The visitors notched 10 offside calls to go with their six shots.

Minnesota United didn’t find a solution until injury time. And it only happened because the entire squad gutted it out on an errant setpiece, refusing to quit on the second ball. Midfielder/False 9 Robin Lod gets the credit, but a team effort right in front of a thundering Wonderwall saw the ball across the goal line into the same bottom left corner that sealed the deal on Wednesday night.

Guts and glory saw out the week. Said midfielder Wil Trapp on Saturday, “I think, once again, you saw the fight, the relentlessness, and the effort from all the boys, putting in shift after shift. It’s been a long week and a lot of miles on our legs, but I think you see the fitness of the group to come in at the 95th minute of the game and win the game.”

Since he brought it up…

Heath’s weekly refusal to shift his tactics in any way, even if it means keeping seven or eight of his starters on the pitch for 270-plus minutes over the course of a week, may well come back to haunt him. He is already forced to manage the minutes of Alonso and Abila (though Abila should be back in stride in short order), but with a couple benches worth of depth pieces, why not do the same for others? We could call this past week a fluke; after all the club does not play another match until May 29, a two-week rest and regenerate period. But with international duties drawing away a few starters away throughout the season, why not give the depth pieces a run out while options abound rather than holding them back until there is no one else to play? Head coach Adrian Heath stuck with the rationale that substitutes are an American obsession:

Some fans may agree, or at least see this reasoning coming from a mile away:

But with six months left to play, and after such a horrific start, we can simply be happy for an opportunity to sing Wonderwall and appreciate any margin of improvement.

The Loons are still in it. Earning only 6 points from 5 games may be disappointing, but it was very nearly 0 points from 6. That would have been an utter failure. In MNUFC’s fifth MLS season, we have yet to see what this club’s identity will be or what Heath’s plan really is. But we’ve seen hints and these last two games fall right into line with those clues. The Black-and-Blue [Grey] is a blue collar club that can get the job done with guts and passion. Success will not be bought but earned, each phase of ‘ascendency’ coming from one step forward against the odds. The odds of a trophy in 2021 are slim, but we know now they do exist. It may not be pretty, but — It doesn’t need to be.

Minnesota United FC will return to action on Saturday, May 29, beginning a long stretch of road games with a visit to new best friends Real Salt Lake at Rio Tinto Stadium.