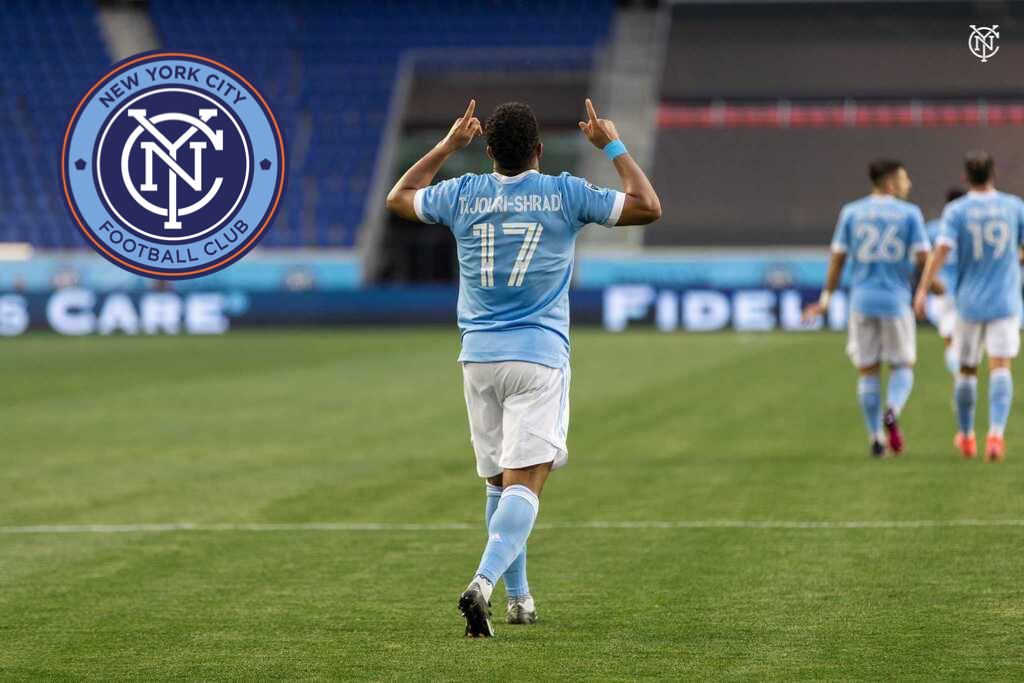 New York City FC began their long stretch of games on the road with a cruel last-minute defeat against Columbus Crew (hooray, they didn’t completely rebrand) in Red Bull Arena. 3,000 supporters trickled into the stadium to support the Boys-in-Blue despite playing in their direct rival’s stadium across the Hudson River. A tifo banner was seen posted stating, “We are here for the players *ONLY*” and it’s hard to disagree with such a statement. Watching New York City FC play in New Jersey is a difficult thing to swallow.

NYCFC started the first half strong, a reoccurring theme this season. Possession was clean, passes were crisp, and attacks were made on goal. In the 18th minute, Taty Castellanos attempted to shoot the ball only to have it bounce off a Columbus defender and head right back to his feet. With an acute awareness of his surroundings, Taty noted Ismael Tajourie-Shradi racing forward. Taty slotted the ball to Isi who was able to sneak the ball slowly past Columbus goalkeeper Eloy Room and into the lower corner of the net.

The rest of the first half saw Columbus controlling most of the possession, but NYCFC taking far more shots toward goal. NYCFC had great buildup from the midfield, mostly thanks to a strong performance from Keaton Parks and the return of Maximiliano Morales, but attacks would fizzle out in the final third. NYCFC’s Jesus Medina was denied a goal by a crucial save from Columbus’s Room. Taty shot inches wide of the goal near the thirtieth-minute mark. Even Tajourie-Shradi was unable to convert a second goal after Andres Jasson was able to feed the ball through to him. The end of the half saw the two teams at 1-0 with New York City FC hanging onto a lead.

The current reigning MLS champs did not give up fighting despite being down at the half. Jonathan Mensa managed to score a goal, but it was quickly ruled offside. NYCFC goalkeeper Sean Johnson had little work to do as Columbus struggled to get the ball into their final third. After squabbling back and forth across the pitch for most of the second half, a foul was given to Columbus Crew just outside the box in the 82nd minute. Lucas Zelarayán stepped up to assess the kick and knocked the ball off the top post to bounce it into the goal. Sean Johnson slightly misread the approach, stepped in the incorrect direction initially, and was unable to readjust to make the save against the highly-skilled free kick. NYCFC regrouped and prepared to see out the remainder of the game with a 1-1 draw.

Unfortunately, defender Sebastian Ibeagha made a poor decision near the box and gave up another foul to Columbus in the waning moments of stoppage time. Again, Lucas Zelarayán stepped up. He calmly blasted the ball into the top corner of the goal, beating Sean Johnson’s outstretched hands. The whistle blew just seconds later to see the final score be NYCFC 1 – 2 Columbus Crew. A harsh sight to see for the supporters who made the journey to Harrison, New Jersey, to see the team play.