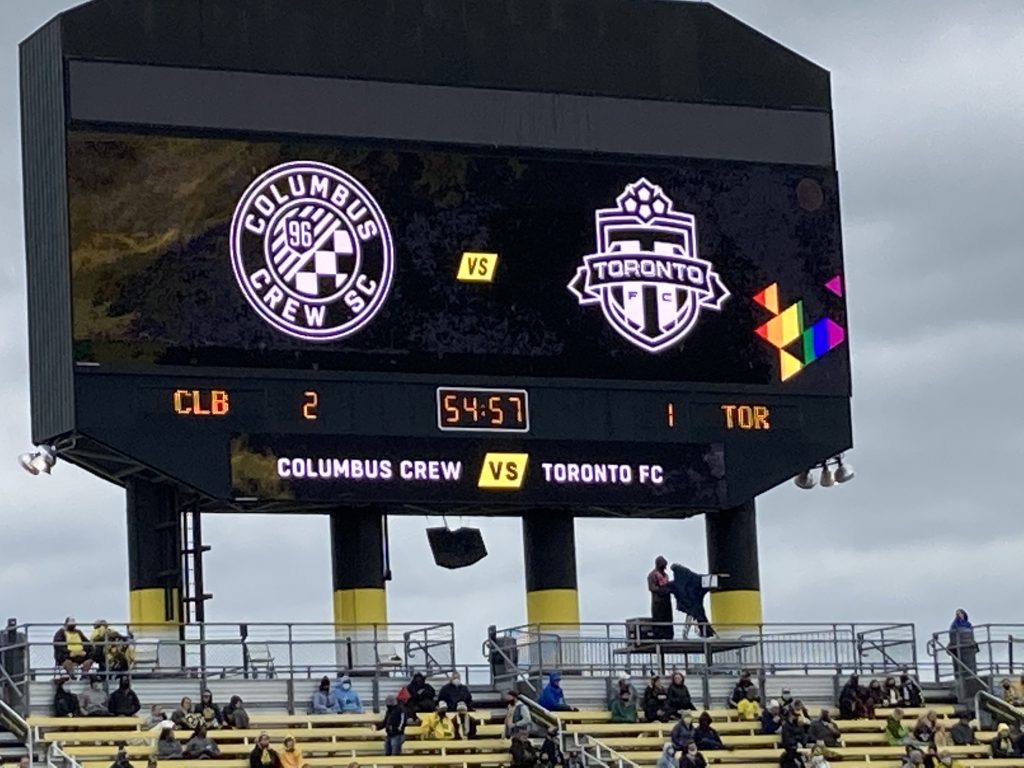 Lining up in their blue Parley Ocean Plastic kits, the Columbus Crew finally found their form playing what is arguably their best half since their first game against CF Monterrey on April 28 in the CONCACAF Champions League. The biggest lineup change was seeing midfielder Pedro Santos at leftback with both Waylon Francis and Milton Valenzuela out. This wasn’t the midfielder’s first foray at leftback; he did it during the playoffs under Gregg Berhalter, and he did it well.

In the 12′, Pedro Santos cleared a Toronto shot pinging around the box from a Toronto corner kick. Diaz used his extreme speed to break away from Toronto’s defense. He stayed well composed and slotted the ball past TFC goalkeeper Alex Bono.

In the 21′, Santos received a ball from Derrick Etienne as he made an overlapping run along the wing. Santos sent the ball to Zardes who got a foot on it, sending it over the head of Bono and into the goal. Zardes had to wait a few minutes as the goal went to VAR, but it was cleared and officially became his 50th Crew goal.

Toronto wouldn’t let Columbus have their best full game and seemed to dominant the second half. In the 52′, Toronto’s Laryea had a strong shot that Eloy Room was able to block. However, the Crew defense was caught standing still as the rebound went to Akinola who shot the ball past Room and Harrison Afful, who was standing on the goal line and made a failed attempt to block the shot. Columbus’ lead was halved, 2-1.

The Crew had a few more opportunities to score but couldn’t finish them. In stoppage time, Michael Bradley almost tied up the game with a shot to the low right corner of the goal, but Room came up big with a diving save. The whistle quickly followed.

This game was a fun one to watch. From rainbow-colored smoke bombs in the Nordecke to celebrate Pride Night to booing Michael Bradley every time he touched the ball, this game felt like a classic Crew match in Historic Crew Stadium. With only one match left at the league’s first soccer specific stadium, I find myself enjoying every minute I can.

Pedro Santos became a different player under Caleb Porter, and his defensive work rate is frequently ignored. He was my Man of the Match. He played strong defense for most of the game and assisted on both goals.

I worry about Gyasi Zardes. He picked up a shoulder injury in the first CONCACAF match against Monterrey. He landed hard on the same shoulder during this game. You can tell that the shoulder injury is impacting his game, and while we have a great forward on the bench–Bradley Wright-Phillips–we play better when Zardes is at his best.

Hopefully, the upcoming international break will allow the Crew to get healthy and continue to improve their form.