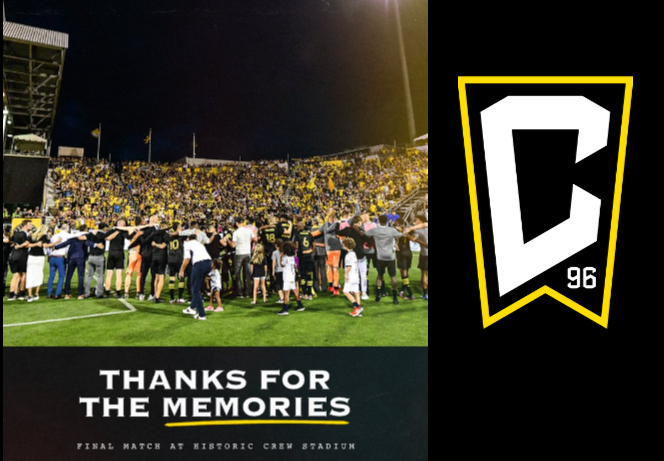 With a packed stadium of 20,064 fans, the Columbus Crew said goodbye to the first soccer specific stadium, and its home since 1999, with a 2-0 win against the Chicago Fire. It was the first game since the beginning of the 2020 season that could be played with a full capacity crowd, and the energy felt like a MLS Cup game as everyone wanted to send off the erector set stadium with style. And I would say the team and the fans definitely did that.

The first goal scored at this stadium was scored by #11 Jeff Cunningham so it was fitting that the only two goals scored in the stadium’s final night as the Crew’s home were scored by our current #11 Gyasi Zardes.

Several times the Chicago Fire had difficulty making clearances, and the Crew punished the Fire for this in the 17′. Zelarayan sent a ball into the box that was headed out weakly by the Fire. Zardes reached back to get that poor clearance and made the shot as he was leaning back giving the Crew a 1-0 lead.

In the 34′, Mensah sent a ball over the top to a streaking Etienne who was essentially left alone with Gyasi Zardes and the Fire keeper. Etienne unselfishly passed the ball to the wide open Zardes who put the ball into an empty net to double the Crew’s lead.

The Fire had some opportunities, but Pedro Santos – again playing as the leftback – played stellar defense and the rest of the line held their own to keep the Fire at zero.

As the whistle blew, the emotion of this game came to the surface as players hugged, fell to the ground, and circulated the stadium clapping with the fans. The 2-0 scoreline could have been more had the Crew finished more of their opportunities, but with the history of the USMNT 2-0 scoreline against Mexico multiple times at Crew Stadium, this final scoreline also fit with the day.

Thoughts on the Match:

This game was not about the play to me. It was about honoring the history, ending this chapter and getting ready for the next. There were tears from many fans–myself included. Outside of my home and my job, I have spent more time at Historic Crew Stadium than anywhere else–over 120 matches starting at the very end of the 2008 season.

During rough times in my life, it was the one place that I could go that provided a connection–the team and the fans were unknowingly my life preserver. There was never a time that I didn’t walk to my seat with a smile on my face as I saw the beautiful pitch unfold in front of me. So, cheers to Historic Crew Stadium, for being the backbone of the soccer that we all stand upon and being the home for our Crew family.