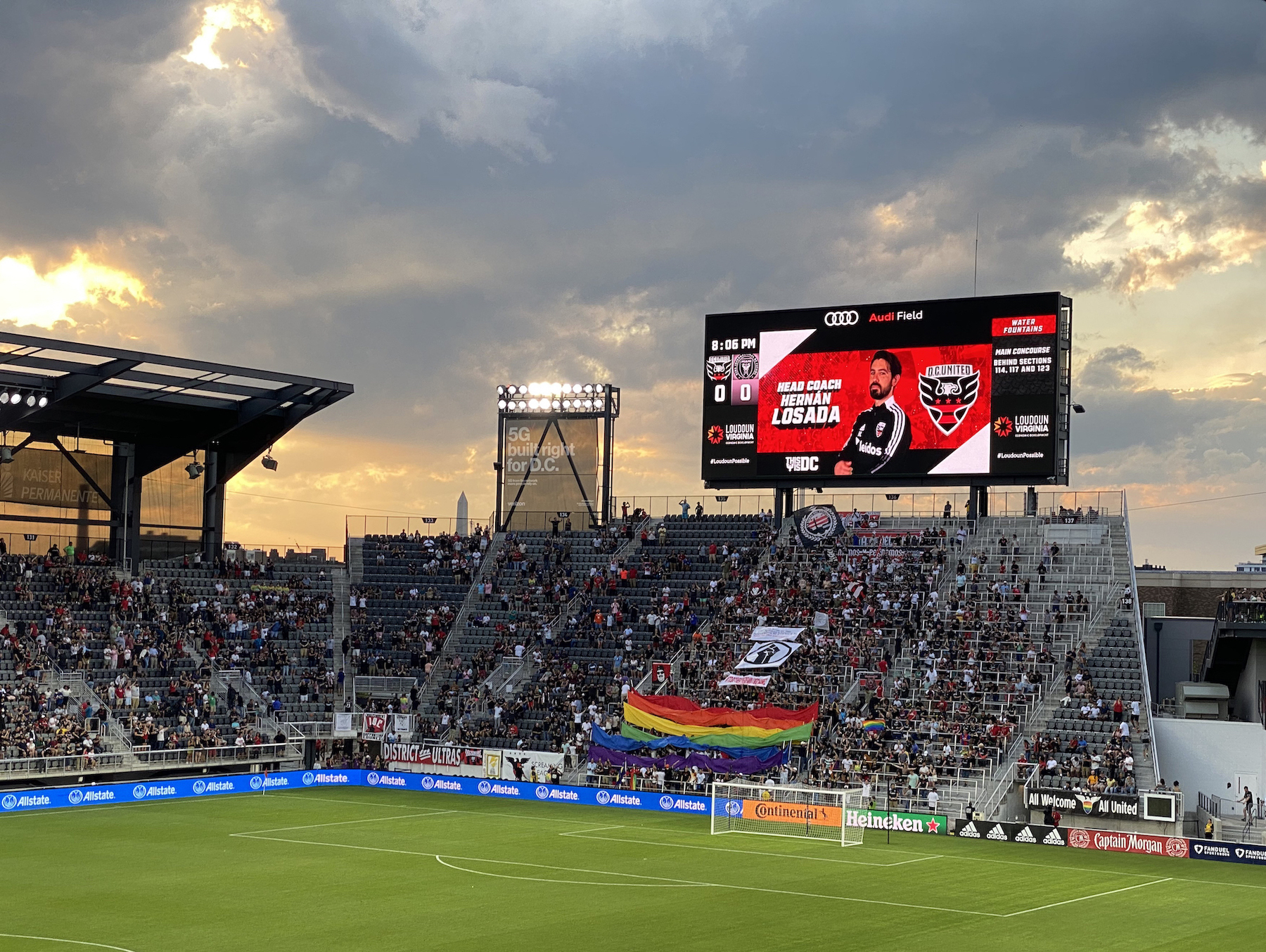 Reunited at a full capacity Audi Field, D.C. United spent a good portion of the evening searching for an elusive opening goal. Despite the creation of ample chances, D.C. wouldn’t find it from the run of play. Rather, a critical mistake – a handball – on the part of Miami defender Christian Makoun in the 71’ led to the only goal of the match, and the game winner.

In the 72’, Ola Kamara netted a penalty, slipping the ball low past Miami’s John McCarthy to secure three points for the Black-and-Red. The cheers were near-deafening, especially compared to the closed-door matches we’ve witnessed leading up to today. Head coach, Hernán Losada commented on the volume that had him yelling the whole match, saying, “now I have pain in my throat, so that’s a positive thing!”

It must be déjà vu. The last time we were all at Audi Field was well over a year ago. Back on March 7, 2020, D.C. United played host to Inter Miami, winning 2-1 on that chilly day. Now, the buzz is back in the air at Buzzard Point, if not just a bit headier and sweeter for the long hiatus.

Soccer is a hell of a drug. I (almost) forgot.

While the Black-and-Red indeed bagged a win against Inter Miami at home, the similarity between the two matches stops there. With a new coach at the helm, it’s a different D.C. United on the pitch, full stop.

Losada’s D.C. United plays an energetic high press, that’s absolutely joyous to watch. With a roaring crowd of 15,000 behind them, the turbocharger was switched on. The fans’ contributions to the match weren’t lost on Losada, who said, “Our fans are really special, they were supporting us and pushing us while we were looking for that opening goal.”

The new style of play suits the Black-and-Red, their creativity unleashed by Losada’s distinct style. Crafting chance after chance, there was no shortage of excitement on the pitch, despite a scoreless first 70 minutes. Andy Najar, a perennial fan favorite, came through in the opening minutes of the game, dribbling through traffic and deftly nutmegging Miami’s Matuidi.

There were plenty of building sequences, with Paul Arriola, Julian Gressel, and Najar putting in work to turn the ball quickly through the midfield and create momentum toward the waiting Miami goal. Unfortunately, many of those opportunities just fizzled out in the final third, something just “off,” as captain Paul Arriola described it. Losada acknowledged that his team needed to, “Be a little more patient, [and] let the ball do the work.”

Homegrown standout Kevin Paredes put in another exceptional performance, showcasing just why he was named to the USMNT’s Gold Cup roster. The precocious eighteen-year-old’s work rate on the pitch, accuracy, and speed make him a definite threat to opponents. Inter Miami certainly recognized just how dangerous Paredes is, as he suffered five fouls during the match, one of which was a contributor to Gregore Silva’s ejection in the 56’ due to yellow card accumulation.

Donovan Pines, another outstanding homegrown player, put in a solid performance supporting goalkeeper Bill Hamid in critical moments to maintain the clean sheet. Pines is an unyielding center back, who capitalizes on his sharp instinct and height to deny opponents their chance on the Black-and-Red goal.

On June 23, D.C. United will face CF Montréal. The quick turnaround for the team played into Hernán Losada’s decision to be a bit more conservative against Inter Miami. He said, “I still wanted to go for the second or third goal, but due to the circumstances, the weather, and knowing on Wednesday we have another game, it was better to save some energy.”

It’s always great to take three points. However, the wins off the pitch are just as important. It would be remiss not to share the incredible effort Black Players for Change, in partnership with Major League Soccer, took to ensure that Juneteenth was celebrated and acknowledged respectfully and in a way that gives back to the community.

Jason Anderson of Black and Red United asked goalkeeper Bill Hamid about the way Juneteenth was recognized. He said, “I’m proud today to be a Major League Soccer player, for the league to stand up, and I’m proud to be an American, because Joe Biden, our president, stood for something and made it a federal holiday.” You can read the rest of Hamid’s response to Jason here, or you can watch a video of the press conference below.

All MLS players wore kits adorned with Juneteenth-inspired numbers, created by artist Israel Solomon. The game-worn jerseys will be auctioned off to benefit organizations supporting Black communities. Here in D.C., the efforts also included a pop-up market of Black-owned businesses (in partnership with Soufside Market) prior to the match, commemorative Juneteenth scarves with proceeds donated to Urban Alliance, and a performance of the Black National Anthem, “Lift Every Voice and Sing.”

New Supporters on the Block

The 2021 season has been a time for change, especially in the supporter section. We’ve seen Rose Room Collective emerge, a supporter group focused on creating space for POCs in D.C. United and Washington Spirit fanbases. Now, 202 Unique has joined the party. A group for queer supporters in the DMV, 202 Unique is a welcome addition to the SG landscape.

Legends in the House

I certainly can’t close this article without a mention of the D.C. United legends who joined the Black-and-Red faithful for the match. Jaime Moreno, Marco Etcheverry, and Ben Olsen joined the fun at Buzzard Point, adding to the good vibes. Olsen took Moreno and Etcheverry on a stroll around the pitch, and they were formally recognized prior to kick-off.

Until next time, Vamos United!