NYCFC Rediscover Their Form Against Atlanta United in Midweek Shutout 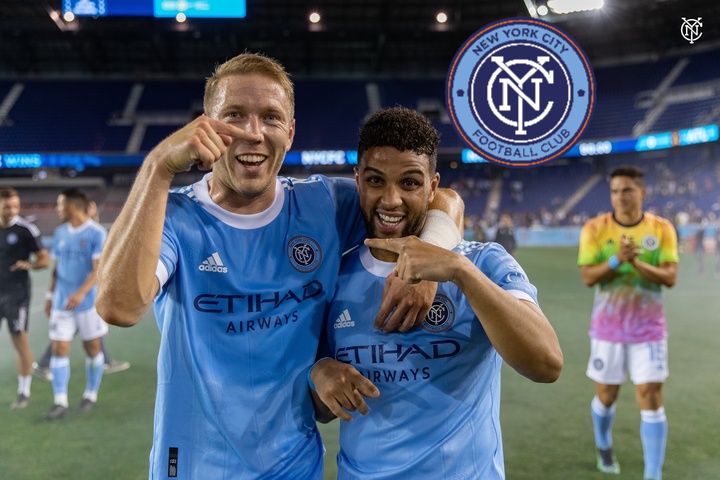 After a disappointing last-minute loss to the New England Revolution on Saturday, New York City FC bounced back with a win over Atlanta United on Wednesday. The game had several historic moments for NYCFC. New York fielded the youngest average team in the club’s short history, starting three homegrown players in Tayvon Gray, James Sands, and Andres Jasson. Gray also celebrated his first start in MLS. A squad full of players near retirement had been an ongoing gripe within the NYCFC community so see the Starting XI full of so many young faces was a breath of fresh air.

With a young squad on the field, anxiety still riddled NYCFC supporters. It was clear that Coach Deila was rotating the first team in preparation for the squad’s third game in seven days against DC United on Sunday. Notable starters that were left on the bench included Maxi Moralez and Anton Tinnerholm. Bronx-born homegrown Tayvon Gray earned the start in place of Tinnerholm. Tinnerholm is consistently ranked as one of the best rightbacks currently in MLS so Gray had big cleats to fill against Atlanta United.

The whistle blew and supporters saw the Boys-in-Blue immediately take control of possession. NYCFC forward Valentin Castellanos won a freekick in the attacking half within the first two minutes. Midfielder Jesus Medina shot on target minutes later only to have Atlanta goalkeeper Brad Guzan save the attempt. NYCFC continued to control the ball and whittle away at Atlanta’s defense. Atlanta United was unable to successfully play their out-of-the-back style until near the 30 minute mark. NYCFC goalkeeper Sean Johnson made back-to-back saves as Atlanta players Erik López and Jake Mulraney both attempted left-footed shots on target.

New York responded to the attack by pushing back and attempting two more shots of their own. Both Tayvon Gray and Ismael Tajouri-Shradi had shots stopped and seconds before the first half ended, Andres Jasson joined them in that column. The first half ended with the teams nil-nil, but with NYCFC clearly in control of the game.

Several botched calls by the referees caused frustration for both NYCFC players and supporters. In the first half, Keaton Parks was fouled just outside the box after an Atlanta player slid in for a late tackle. There was no yellow card given. Keaton was also aggressively tackled in the box later, but again, no card was given. The second half was no different. When Atlanta United player Erik López was shown a yellow card for a late foul, VAR intervened to review a potential red card offense (for tackling studs up), but after review, the card remained yellow.

NYCFC coach Ronny Deila made a few key substitutions, putting in Maxi Moralez and Anton Tinnerholm at the 59th minute. The changes on the field were immediately noticed. NYCFC was able to orchestrate stronger attacking plays until Castellanos crossed the ball to Tajouri-Shradi who was finally able to break Atlanta’s defense and slot the ball past Guzan.

Atlanta United was not going to let NYCFC seal the three points without a challenge. Possession seemed to sway in favor of Atlanta United following the goal. A shot by George Bello soared too high over goal, but Atlanta players rallied attempting to get the ball back in their attacking half. New York City FC had a response for each one of their plays. In a frustrating moment of surprise, NYCFC midfielder Maxi Moralez crossed the ball toward goal, but missed. Taty Castellanos found himself in front of the missed shot and attempted to redirect the ball into goal, ultimately hitting the goal post and sending the ball away from goal.

With five minutes left in regular time, Deila made one more tactical substitution, bringing Taty off for defender Sebastian Ibeagha. With most players on the pitch being defensive, Deila’s squad was able to shore up against Atlanta and shut them out 1-0 at fulltime. It may have not been the prettiest of games, but this victory is very notable as Atlanta is never an easy team to play against. NYCFC was fortunate that Atlanta did not have Josef Martinez in the lineup. But for a young NYCFC team that had rotated players, this was one of the better performances the team has demonstrated this season.