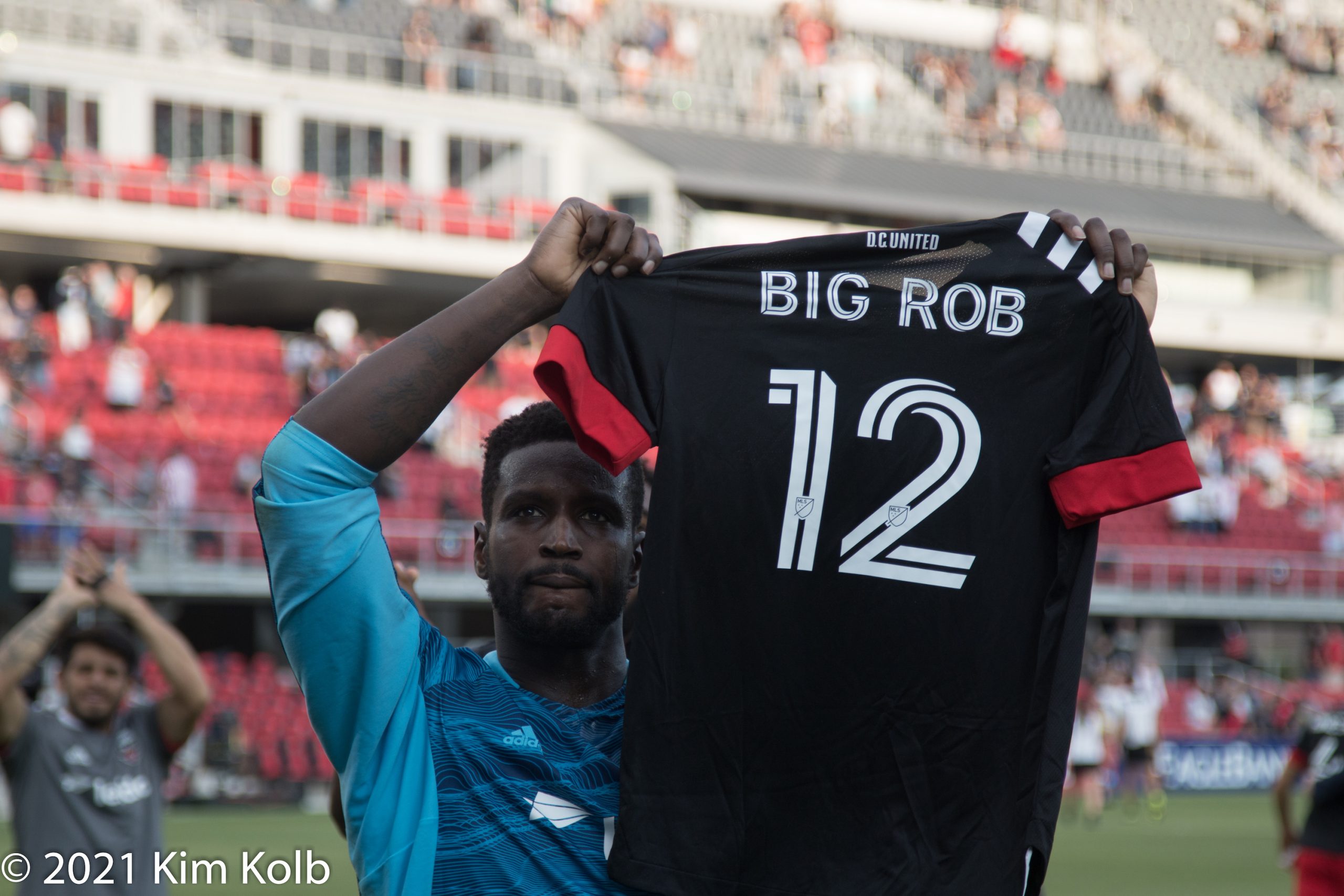 You’ll notice it’s taken me more than a minute to gather my thoughts after D.C. United’s July 3 blowout at Audi Field. Sometimes the words just don’t come easily to reflect the gravity of the moment. We said goodbye to a legend, Robert “Big Rob” Gillespie, and we celebrated a historic D.C. United win – together.

Yes, a dominant D.C. United defeated Toronto FC at Audi Field 7-1 over Fourth of July weekend, setting a new club record. But there was more to the outcome of the match than a record score line. Even on the heels of a disappointing road trip, the Black-and-Red found the moxie to deliver on the promise of “Losada Ball,” fully realizing a style of play that we’ve caught glimpses of so far this season.

Toronto may have been a bit blindsided by D.C.’s grit. After all, this was a stunning result from a “team like that.”

“We’re angry with ourselves, we’re frustrated. For a team that wants to be as good as we do and for a team that holds ourselves to the standards that we do, there’s no way that you should let a team like that back in the game today.”

Granted, D.C. United is a far cry from the team that took on Toronto back in Florida. Hernán Losada’s refreshing coaching style that puts trust and belief in his players first has given the team a new lease on life. As Losada put it, the confidence and clinical finishing seen on the pitch against Toronto Saturday night was the result of, “a lot of training, a lot of individual meetings.”

While D.C. has struggled this season with the final third and rushing in front of goal, those early challenges seem a distant memory, erased by not one or even two goals, but SEVEN beautifully netted shots. In case you missed them, or if you were there to witness them firsthand, treat yourself for a minute and watch this:

For Paredes, this moment has been a long time coming. The homegrown standout explained how persistence finally paid off, this goal the result of, “many talks with Hernán, basically about positioning and to be in that spot. He said that if I’m in that spot, something good is going to happen. I had that spot against Miami and we all know that I, unfortunately, missed that one. But I knew if I ever got that chance again I was going to put that one away. Once it came to me I just swung through it. I saw it go… I was very excited.”

While Losada’s coaching has pushed Paredes to refine his skill and IQ on the pitch, the young player also made sure to recognize the contributions of two very important people. “I need to thank especially my parents, for always believing in me. You know my mom, she would always take me to D.C. Academy training and she was in college, so she would do a lot of her schoolwork in the car and late nights. My dad always worked so hard for myself and my two brothers to keep us out of trouble.”

After Paredes and Robertha snagged the lead, D.C. United kept the pressure on. In the chaos of a traffic jam near Toronto’s goal, a ball from Russell Canouse was deflected off first Priso and then Gonzales to find the back of the net – raising the Black-and-Red’s tally to three. The official MLS Matchcenter stats say it was an own goal by Priso, but for those of us who stood witness at Audi Field, it was Canouse’s goal. Unfortunately, D.C. wouldn’t keep a clean sheet as Ayo Akinola took advantage of a minute error to slot a ball past Bill Hamid in the 39’. D.C. headed into halftime up 3-1.

The Black-and-Red came back hungry for more, making the case for why they truly are a team to watch this season. Paul Arriola slotted one home in the 71′, assisted by Najar to open the scoring for the half. Unfortunately for Toronto, Eriq Zavaleta was shown two yellow cards in quick succession, resulting in his ejection from the match. Zavaleta’s red card seems to be keeping with a theme this season of opponents being forced to face the Black-and-Red with ten men at some point during a match.

Striker Ola Kamara quickly took advantage of Toronto’s depleted status to score in the 81′. Kamara quickly netted another ball, however, the flag was up, declaring him offside. He still leads the league in goal ratio this season. Eager to join the party, Yamil Asad and Griffin Yow made sure to find the back of the net before the end of the match scoring in the 85′ and 90′ respectively.

Black-and-Red supporters were certainly rewarded for their patience with a match that was downright fun to watch. Yes, Hernán Losada is delivering on his promise of exciting soccer, but he’s also bringing incredible positivity to the club. Losada is very clear about why the team is showing increased confidence and rapidly improving:

Saying goodbye is one of the hardest things to do, especially when it’s to someone who has shaped the community so many of us consider a surrogate family.  On June 27, we lost a legend. Robert “Big Rob” Gillespie had fought a rare form of cancer for years, and his fight became the fight of a community as Black-and-Red supporters rallied behind him.

Social media has been full of stories about Rob, from those who knew him well, to those who have only met him in passing. If you take a few moments to scroll these accounts, you’ll see some common threads. Above all, Rob was kind, welcoming, and loved his son Marco and D.C. United. It didn’t matter to Rob if you were an original 96’er or brand new to the community, if you were passionate about D.C. United, that was good enough for him.

The first, and only time Rob and I met in person was about two years ago. Although Rob had moved out of D.C. before I started covering the team, through the magic of social media we had struck up a friendship. I’ll never forget how happy he was to see that D.C. United finally had a home at Audi Field, or how ecstatic everyone was to see him finally come home.

Rob left us too soon, but he left us with a lot. The community Rob helped create and the connections we all have to one another as a result are priceless gifts. Now, it is up to us to carry on Rob’s legacy – to be kind, to be welcoming, and to continue pushing this big, imperfect “family” to be better.

Thank you for everything, brother.

Please join the Black-and-Red community in supporting Big Rob’s son, Marco. Donations can be made here.