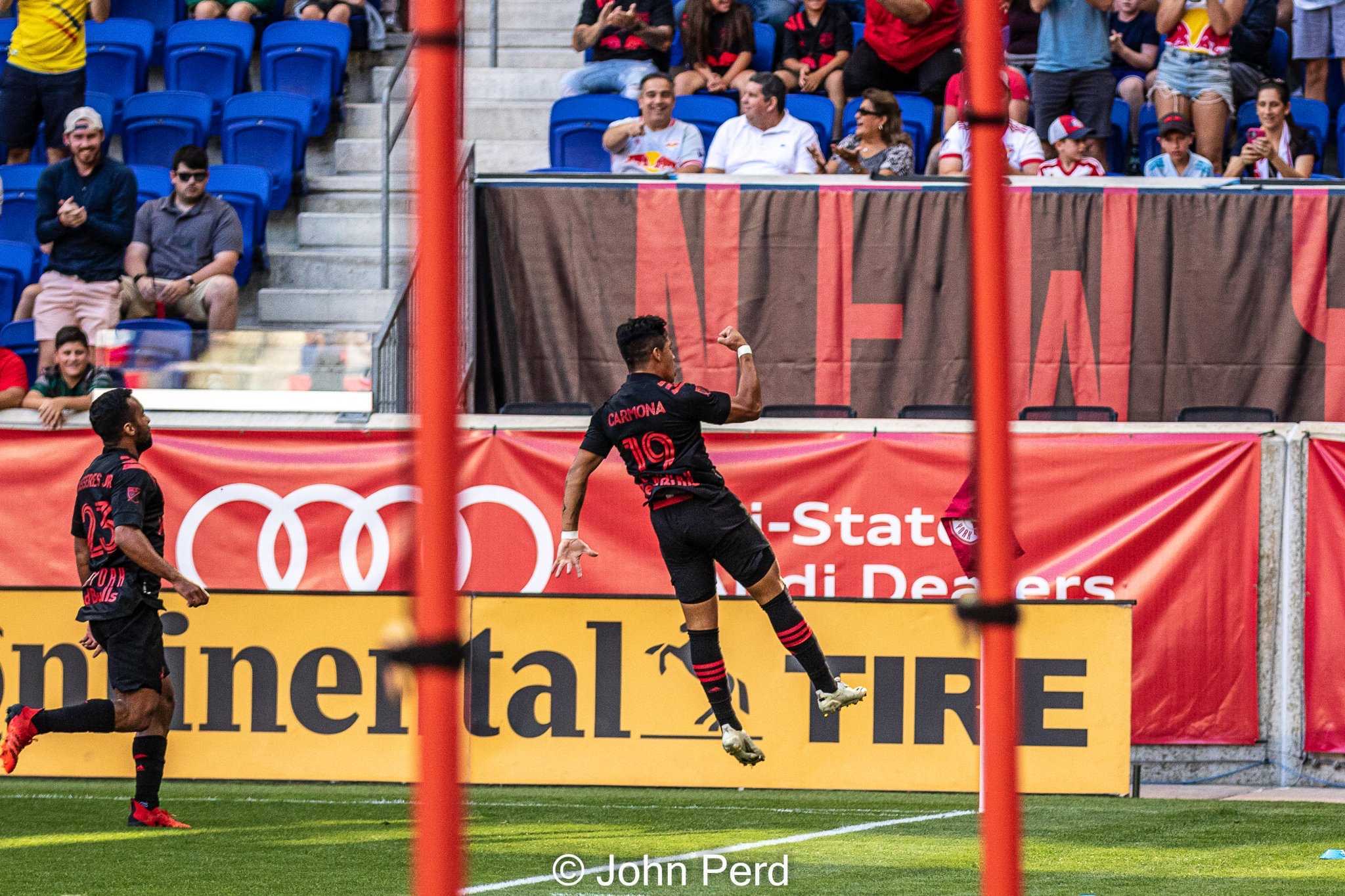 Every so often, I walk into Red Bull Arena completely unaware of what is about to transpire. The Red Bulls are sitting in 9th place, out of playoff contention. Meanwhile, the New England Revolution are riding high in the top slot. Can the boys in Red surprise me? Better yet, can they surprise their opponent?

Nine minutes in, Wiki Carmona took a ball from Kyle Duncan and buried it in the Revs’s goal. Although Revs goalkeeper Brad Knighton went the right way to stop it, it bounced off his glove and in. Carmona’s first MLS goal saw him basking in celebration with teammates and fans. Everything started off right. The next twenty minutes belonged to New England. They kept the ball near the South Ward, and threatened the goal more than once. A free kick in the 28th minute made it to Carlos Coronel’s hands. The woodwork of the goal put in a solid shift in the first half as well, with at least two Revolution shots banging off the frame. Caden Clark, returning from an appendectomy, is still trying to get his bearings, with his shots sailing over the New England goal.

He showed off, splashing around

There was plenty of physicality from both sides, as evidenced by twenty-seven fouls and four yellow cards during the match. Klimala was knocked around and had to be subbed off for Tom Barlow. Other substitutions for the Red Bulls included Dru Yearwood and Florian Valot.

Ripped at the Seams

Just at the hour mark, Gustavo Bou whipped a ball around Coronel and into goal, bringing the score to 1-1. Fabio responded less than three minutes later to put the home team ahead again. Gameplay grew a little sloppy, but nothing devastating. While the Revs found the net again, it was called back as offside. Not discouraged, the Revs were strong on the ball, and pushed RBNY as much as they could. Brandon Bye leveled the match again (84′) with a goal during a set piece. Then Adam Buksa found the go-ahead goal in stoppage time, during a flash of confusion at the top of the box. And while the Red Bulls pressed for every second that followed, it was not enough. Three points from three goals go back up I-95 to Foxboro.

That brings me back to my thoughts as I walked into this cathedral of MLS. I really didn’t know what to expect. My concern is that the team doesn’t know, either. Manager Gerhard Struber, a stauch believer in the Red Bull system, knows what he wants, and feels he can get it from the team in front of him. So what’s the problem? Giving up goals and points, you don’t get very far. The Red Bulls return for a midweek matchup against FC Cincinnati.