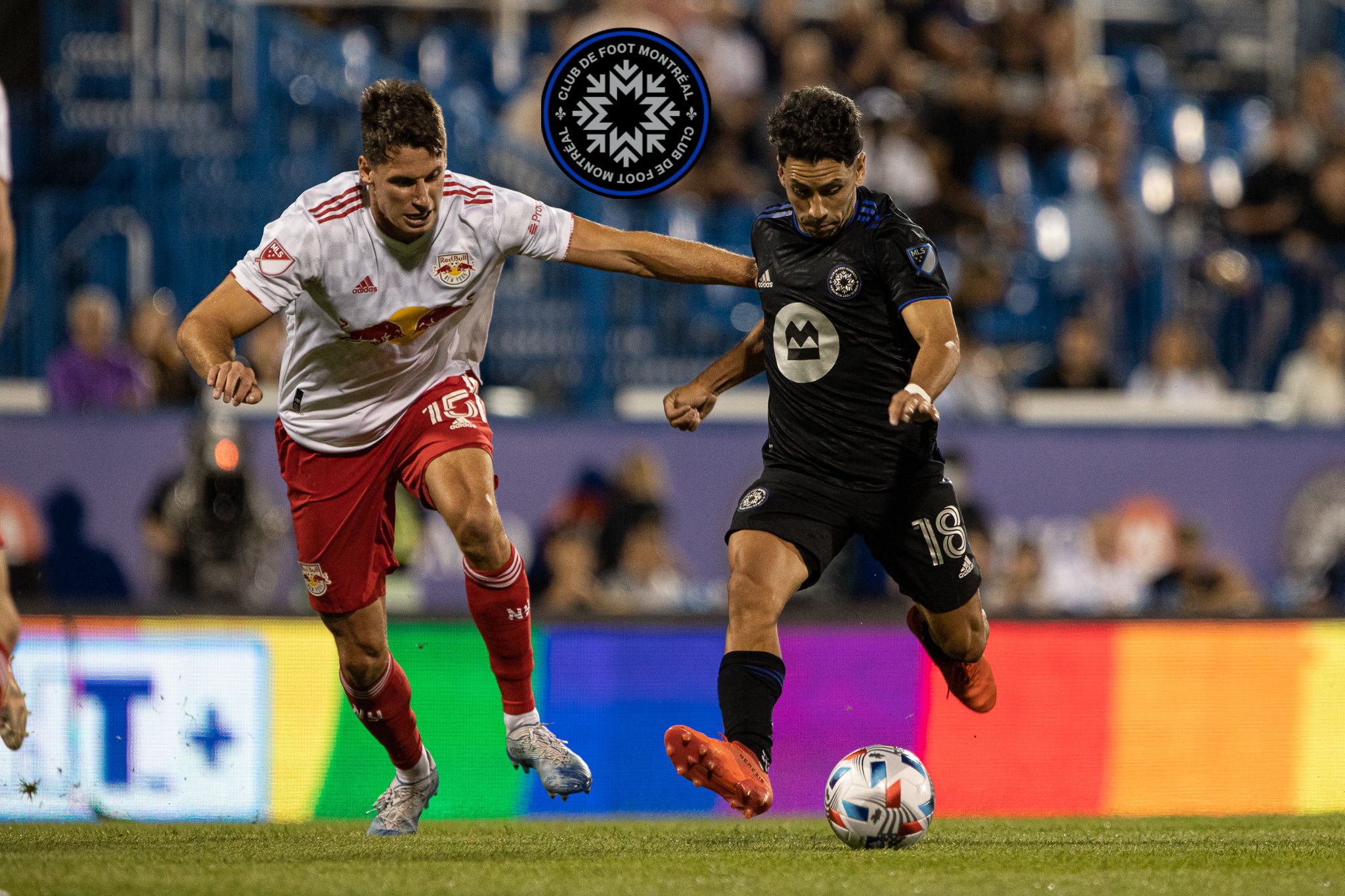 Even on a five-game winless streak, fireworks had not been lacking since CF Montreal made a long-awaited return home to play north of the border. A 5-4 comeback win over FC Cincinnati was followed by a 2-2 draw with Atlanta United, marred by penalties and red cards galore. Pride night at Stade Saputo would end up being no exception. CF Montreal and RBNY both came into the match desperately looking for a win to keep playoff hopes alive as the second half of the MLS season moves full steam ahead.

Following quarantine, suspensions, injuries, and international tournaments, Montreal was finally able to line up the preferred centreback trio of Kiki Struna, Rudy Camacho and Kamal Miller for a full 90 minutes for the first time since the Gold Cup started back in July. Notably for the Red Bulls, Cristian Casseres was on the bench after being substituted in the 18th minute in the team’s previous match, having struggled with fitness in his return from injury.

There was little to separate the two sides for the bulk of the first half, and referee Allen Chapman seemed prepared to allow a fairly physical game to play out. The difference came when Zachary Brault-Guillard tried to start an attacking move down the right side, only to turn over possession. RBNY broke quickly, leaving him wildly out of position. Struna was left outnumbered by attacking players, and his rash slide tackle as he covered extra ground was called for a penalty. Patryk Klimala converted with the last kick of the half to put Red Bulls up 1-0.

The second half saw Montreal leading on the attacking foot, however, the final decision was generally the wrong one, regardless of which player had the ball at his feet. There was either a great shooting opportunity which was ignored for a pass, as in the case of Brault-Guillard, or a player elected to shoot with a low-probability option when teammates were open around him, as happened with Joaquin Torres. Substitute Sunusi Ibrahim came on and served a low cross to a breaking Mason Toye, who missed an empty net completely. It began to feel that the winless streak would last another match.

In the 71st minute, Djordje Mihailovic received the ball from Toye and drove to the top of the box. The ball took a deflection from a defender, leaving Mihailovic drifting toward the goal line. Rather than allowing the ball to cross the line, Mihailovic served a deliciously-weighted cross to Ibrahim, and the diminutive Nigerian teenager headed in his first goal in Montreal colours to tie the match. Still, the win was a necessity.

As five minutes of injury time began, Wilfried Nancy had deployed the most attacking substitutes at his disposal and Bjørn Johnsen carried the ball forward and attempted a low cross into the box. It was blocked by the arm of Amro Tarek, which trailed behind him on the ground in a sliding tackle. For the second time on the night, Chapman pointed to the spot. Despite Toye being the designated taker, Johnsen insisted and stepped up. His low effort was easily captured by Carlos Coronel as the stadium groaned. But wait! VAR had spoken: A retake was required as Coronel had left the goal line too early. This time Toye stepped up. But he too was thwarted by Coronel. Was it a case of “Ball don’t lie?”

VAR would have the last laugh. Chapman was called to the screen again, and saw that Coronel had repeated the error. A third try would be required. This time, captain Wanyama kicked from the spot, and although Coronel got hands on the ball, the penalty was finally scored in the 98th minute of play.

The winless streak has ended, but it may have come at a cost as Johnsen’s disregard for PK hierarchy could prove to disrupt harmony, and Toye left the pitch with his arm in a sling following contact with an opposition player in the dying seconds. However, Montreal end the weekend with playoff dreams alive and a win in front of the home fans in the books.

Next up, Montreal travel to TQL Stadium to face FC Cincinnati on Wednesday, August 18th at 7:30 PM EST.