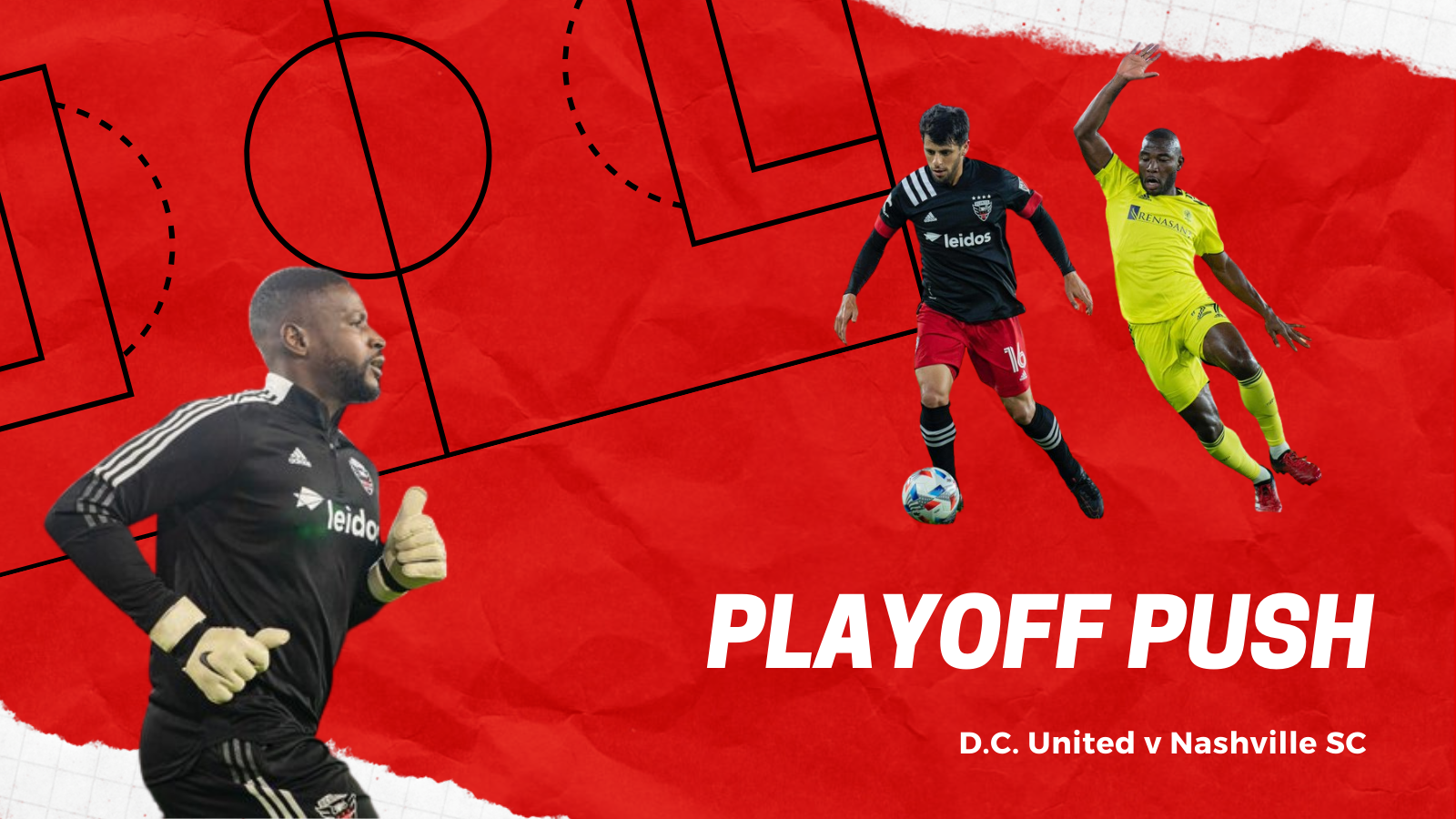 Down to the last six matches of the grueling, regular MLS season, D.C. United was hunting for three points. Instead, the Black-and-Red were forced to a scoreless draw at home by a hard to break down Nashville side.

The last time the two teams met, D.C. was down a goalkeeper – the unshakeable Bill Hamid – and in the middle of a particularly brutal summer push. Now, the Black-and-Red are without a number of players due to international duty and injury, forcing head coach Hernán Losada to make difficult decisions.

“We are not happy with a point, especially at home,” said Hernán Losada. He reflected on the injuries D.C. had endured over the course of the season saying, “I don’t remember two weekends in a row that we could play with the same starting players.”

Early in the match, D.C. created strong chances. A close call in the 3’ saw Ola Kamara’s shot deflected off the post. Donovan Pines followed up Kamara’s attempt with a header in the 7’, taking advantage of a momentary opening in the center of the box.

In a bit of déjà vu, CJ Sapong and Hany Mukhtar led Nashville’s attack, pressing D.C.’s defense a bit too convincingly. Sapong found an opportunity to slot the ball to Luke Haakenson in the 6’, and he made a direct shot. But D.C.’s Bill Hamid easily captured the ball denying Nashville the goal. Mukhtar took a chance in the 26’ but skied the ball, missing his target.

A flurry of fouls in the 15’ saw both Russell Canouse and Nigel Robertha taken down near Nashville’s goal. Unfortunately, D.C. was unable to capitalize on the subsequent free kick opportunities. Like everywhere else in the District, there was simply too much traffic.

Despite a bevy of chances on both sides, the first half ended scoreless. In the interest of resting players, Losada made a double substitution at the half, bringing on Chris Odoi-Atsem for Andy Najar, and Joseph Mora for Adrien Perez. Najar had just played 90’ on Wednesday for Honduras against Jamaica during the international break.

Unfortunately, the fresh legs did little to move the bus Nashville parked. Frustrating stop and start play disrupted the flow of D.C.’s gameplay, denying them much of a chance to build up momentum on the pitch.

In the 65’ a particularly chaotic sequence in the box seemed primed for a D.C. goal. But, as the ball ricocheted from player to player, the Black-and-Red simply couldn’t find an opening in the sea of yellow bearing down on them.

More substitutions on both sides marked an otherwise uneventful second half. Nashville made a substitution that would see Alex Muyl on for Haakenson in the 67’, while D.C. brought in Drew Skundrich for Nigel Robertha in the 69’. Audi Field breathed a collective sigh of relief when CJ Sapong left the match in the 73’, effectively shut down by a strong D.C. defense. Goalkeeper Bill Hamid kept a clean sheet with the help of Man of the Match, Donovan Pines.

While the Black-and-Red emerge a point richer from the match, they drop in the Eastern Conference standings to 6th place. Nashville will maintain their number two spot, with 48 points. The final score of the match certainly doesn’t reflect the incredible effort made by D.C. United; the Black-and-Red led the match in shots, shots on goal, corners, and possession.

With five more games to go in the next two weeks, it will be a mental and physical challenge for the Black-and-Red, especially as they are missing players due to injury. Defender Donovan Pines said the team will, “play every game like it’s the final.”

Next up, D.C. United face first-place New England Revolution at home on October 20.