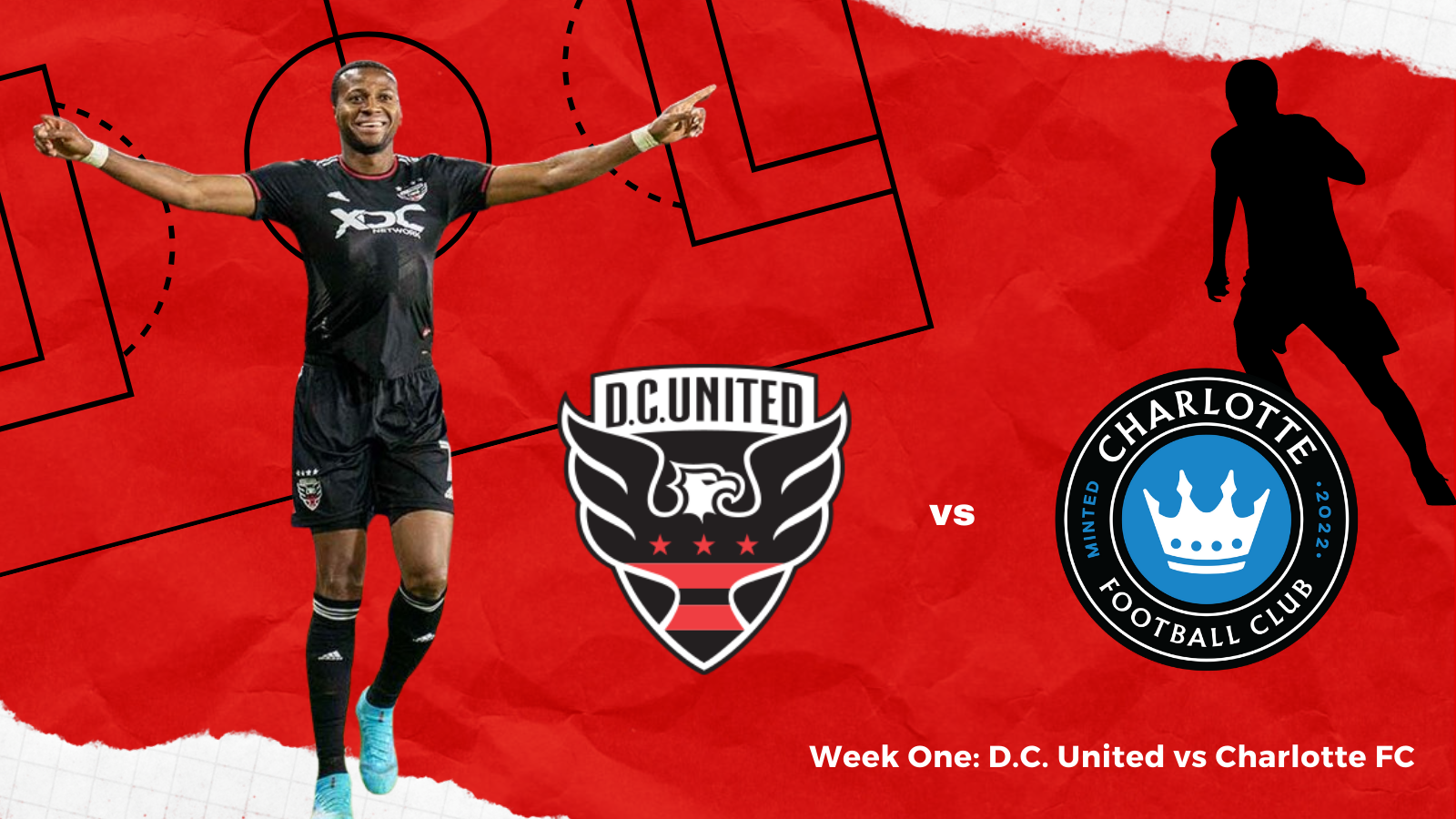 Michael Estrada made his Black-and-Red debut with a brace and Ola Kamara rounded out the scoring for D.C.’s win.

Home Openers are for Winning (and Freezing!)

Although D.C. United’s roster is full of new faces, this season’s home opener definitely maintained the traditions of chilly temps and a Black-and-Red win.

Despite bringing a bevy of supporters (and former D.C. United players) to Audi Field, expansion side Charlotte FC wasn’t able to find any real estate on the scoreboard. The only time the team found the net, in the 19’, Cristian Ortiz was determined to be offside after VAR review.

The first 45’ was choppy at best, as both teams struggled to find their footing. Charlotte maintained a decent press, making for a few nail-biting moments for Black-and-Red supporters, but all in all the two sides seemed well matched.

The triad of Michael Estrada, Edison Flores, and Griffin Yow up top for D.C. set expectations high for opportunities on goal, but there were numerous missed connections throughout the half, likely a lingering result of a mass of roster changes. Notwithstanding some messy first-half play from both sides, D.C. United emerged as the clear frontrunner.

Michael Estrada signed, sealed, and delivered his debut performance with a brace. In the 37’ he easily netted a penalty kick, slipping the ball past Charlotte’s Kristijan Kahlina. A slick shot in the dying minutes of the half saw Estrada double D.C.’s lead. Although Charlotte’s Yordy Reyna (with D.C. United last season) was clearly hungry for a goal of his own, the visitors went to the half scoreless.

D.C. rallied a good bit in the second half, snapping mostly back to form. Head coach Hernán Losada said, “we had a few difficult moments during the first half. Thanks to the VAR the score wasn’t 0-1 against us…You go to the locker room with a 2-0 lead. We went to the locker room and I told them, ‘let’s go for the third goal.’”

Losada started making his changes in the 64’ with a pair of substitutions that saw Ola Kamara in for Estrada and Sofiane Djeffal in for Moses Nyeman. It took Kamara all of a minute to score his first goal of the season (65’).

Reyna almost had his goal for Charlotte in the 67’ when he made a left-footed shot that deflected off the post. Although Reyna didn’t find his target, it was a clear warning shot that reminded D.C. not to get complacent.

In the 75’ and 76’, Adrien Perez replaced Edison Flores and Chris Odoi-Atsem entered the match for Andy Najar. Charlotte FC began making their first swaps in the 78’ and 79’, bringing in Jordy Alcívar for Reyna and Ben Bender for Brandt Bronico.

After a corner taken by Charlotte, Griffin Yow too left the match, with Azaad Liadi replacing him in the 82’. A complete turnover of the front line didn’t produce any further goals for D.C., but given the 3-0 score line, the pressure to produce was significantly less.

Hernán Losada acknowledged that although there were, “a lot of positives to take out,” from today’s matchup with Charlotte, there were also, “areas to work on.” As the team coalesces and gets to know one another better it seems like many of the match’s small issues will resolve, leaving D.C. in fine form for the season.