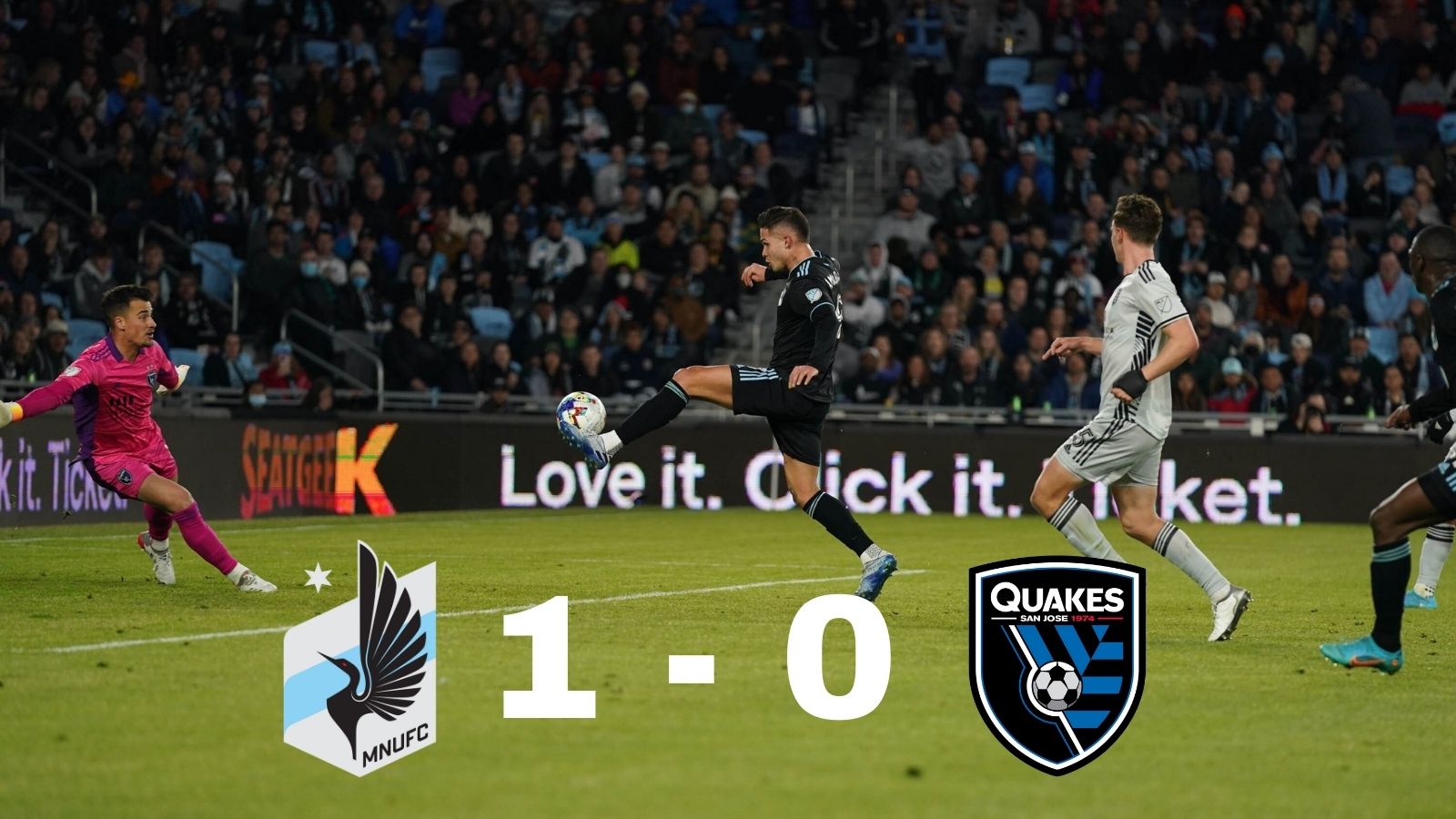 Despite a shortage of goals, there was no shortage of fireworks (i.e. fouls) at Allianz Field on Saturday night when Minnesota United FC hosted two former captains and the San Jose Earthquakes. The Loons’ 1-0 win punctuated what seems to be the club’s identity in 2022: Gutsy play emphasizing results over goals, with a touch of flare.

There were plenty of storylines ahead of Minnesota United FC’s Saturday night primetime matchup with San Jose: The return of former Loons captains Francisco Calvo and Jan Gregus; Luis Amarilla facing Calvo; Minnesota-native Jackson Yueill returning home on his birthday; the possibility of a Bongokuhle Hlongwane start. Each of those narratives had legs when the first whistle blew. Calvo, Gregus, Yueill, and Bongi all started. Amarilla was the game’s lone goal scorer. And it was just as chippy as you’d expect.

With Franco Fragapane nursing an injury on the bench, Bongi Hlongwane made his first start for the Loons on the left wing – the only change to a fairly concrete front four. Despite fears that Wil Trapp would be sidelined with a bug (the same one that kept goalkeeper Tyler Miller out of action last week and that seems to be working its way through camp), he was back alongside Kervin Arriaga for the second consecutive match.

It is unfortunate that this midfield consistency carried over into the turnover column, with the first ten minutes of the match being a series of both picked pockets and cheap giveaways. However, while the same problem last weekend required goalkeeper Dayne St. Clair to stand on his head for 90 minutes and make eight saves, San Jose was held to just four shots all night with none on target – a bonus training session with an audience for DSC.

With giveaway frustration comes yellow cards. Trapp was the first to be booked, a tame jersey tug enough for referee Pierre-Luc Lauziere to reach into his pocket in the 8′. He did the same minutes later for San Jose left back Marcos López and the pattern was set: A foul was a yellow, even if it was a red. Lauziere issued five yellow cards on the night. The third, issued to Calvo in the 43′ for a [very] late and dangerous challenge on Robin Lod, was reviewed and judged not to be a clear and obvious error, but it may well be addressed in this week’s disciplinary review.

Also up for review this week is Calvo’s marking of Luis Amarilla about ten minutes earlier. The striker easily split Calvo and Eric Remedi to put a beautiful finish on a cross from Lod in the 32′. Amarilla’s first goal at Allianz Field was worth the long, two year wait.

Despite a chippy second half, full of shots (by Minnesota), fouls, and subs, Minnesota held on to another shutout and three big points that put them, however briefly, at the top of the West. If the Loons hope to retain this position at the top end of the table, they’ll need to start scoring more goals. But two 1-0 finishes are a reminder that two things can be true:

With a handful of players headed out for international duty, the Loons head into the short break on a high but will need to regroup quickly before returning to Allianz Field on April 2 to face the Seattle Sounders.